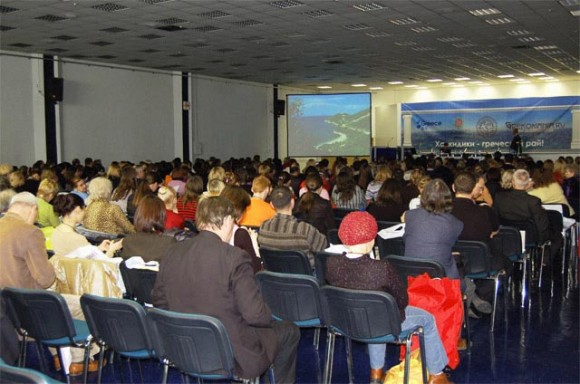 Among parallel events at MITT 2009 was the presentation of the Chalkidiki prefecture, which attracted some 420 tourism professionals, tour operators and representatives of the media. A workshop was held between Russian tour operators and members of the Chalkidiki Hotel Association where it was mentioned that one third of the Russian tourist flow to Greece prefers Chalkidiki. According to tourism professionals, Chalkidiki will possibly not see a reduction of tourists from the Russian market despite the economic crisis that has plagued the global economy. Some even spoke of a possible 10 percent increase. The presentation was held under the auspices of the Chalkidiki Prefecture and Mouzenidis Travel.

The 16th Moscow International Travel and Tourism (MITT) exhibition ran from 18-21 March in the atmosphere of the world economic crisis and analysts wondered of overall consumer demand and, first and foremost, if the demand for traveling had dropped.

But according to MITT organizers: “The show goes on,” and saw 3,000 exhibitors from 120 countries of the world that demonstrated the best achievements of the travel and hospitality industry.

This year’s MITT saw the participation of Greece, which was composed of 73 hotel chains, travel agencies and prefectures.

In regards to Russian tourism traffic to Greece, the president of the Hellenic Hotels Federation, Andreas Andreadis, commented that “although it is still early to make predictions, current bookings are on a low level.”

According to Russian press reports, information from the Greek Visa Center in Moscow showed that during February-March the number of applications for visas to travel to Greece dropped some 50 percent over the same period last year.

At a press conference, Tourism Minister Kostas Markopoulos informed Greek and Russian media that despite the crisis Russian tourists and travel agencies continue to see Greece as a holiday destination.

“Russian arrivals to Greece last year were just over 300,000,” the minister said.

Mr. Markopoloulos also announced that Greece would increase its promotion in Russia through outdoor advertising, TV commercials and advertisements in Russian media. (Greece’s advertising campaign for tourism is estimated to cost at least 75 million euros.)

The tourism minister also spoke of the success of the Greek visa center established in Moscow last September. (Greek media had reported that since the center’s opening in September 2008, visa issuance grew by 64 percent compared with the same period in 2007.)

Reports say that Russian tour operators claim to be pleased with the visa center as it issues entry visas to Greece for Russian citizens within 48 hours.

A visa center in Yekaterinburg opened last month and according to Deputy Foreign Minister Yiannis Valinakis, new visa centers should be opened in Novosibirsk and possibly Rostov by early May.

The ministry intends to open more centers in remote regions of Russia to contribute further to the facilitation of Russian tourists to Greece.

On his part, the president of the Greek National Tourism Organization, Yiannis Kofinis, said that the excellent political relations Greece has with Russia could heighten the economic relations between the two countries to the advantage of the tourism sector.

“Russia is a target market for Greece and there still is great potential for further development,” he said.