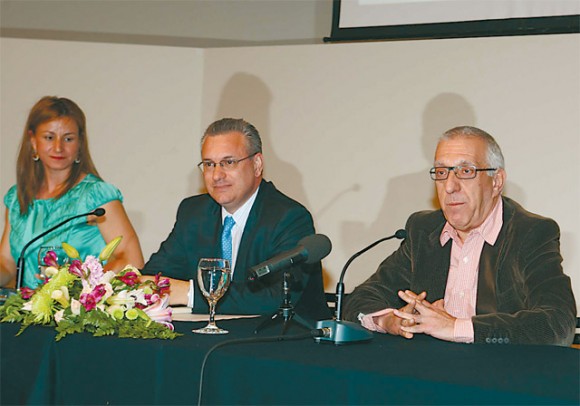 World of Athens President Tatiana Karapanagioti; Tourism Minister Kostas Markopoulos; and Athens Mayor Nikitas Kaklamanis during the presentation of the new World of Athens advertising campaign. According to Mayor Kaklamanis, in order to attract more tourists from the U.S. Greece must dare to allow international cruises to begin from Piraeus.

The tourism ministry recently announced the launch of an extensive advertising campaign for the promotion of Athens set for May and June that includes a series of actions and events to take place in the U.S. and Europe.

According to Tourism Minister Kostas Markopoulos, the promotional campaign will take advantage of the “World of Athens” philosophy, which is the creation of a network of the 24 cities worldwide that are named after Athens.

“The main idea is to show the contribution of Athens to the world’s evolution and to promote the city as an ideal tourism destination,” he said.

According to the president of World of Athens, Tatiana Karapanagioti, the notion of the World of Athens is to bring all of those cities closer together and make them ambassadors of the tradition and culture that is embodied within the concept of Athens.

“We already have started to communicate with the other cities named Athens, most of which are in the USA, and at the moment we have received a very positive and enthusiastic response,” she said.

The concept of each road show will include a World of Athens sphere placed in each city’s central square for a four-day period from 12 noon to 10 pm.

The sphere is an impressive 15-meter movable projection dome that symbolizes the world of Athens.

Moreover, within the central squares and around the sphere a replica of the Athens city will be displayed accompanied by outdoor photo exhibitions, Greek music and other events.

In addition, a business partenariat will be organized for the effective promotion of Athens to tour operators, travel agencies, conference organizers and journalists of every city.

The tourism minister underlined that all road shows in the U.S. and Europe will be advertised extensively by local and international media through the press, radio spots and television commercials.

He referred to upcoming major events and conferences that will also contribute to the promotion of the image of Athens.

Mayor Kaklamanis made special reference to the first European Union Conference on Anti-Doping  that is to be held in the Greek capital from 13-15 May.

He also underlined the importance of the International Children’s Games to be held between 23-28 June in Athens and the Special Olympic Games that are to be hosted in 2011.

Mr. Kaklamanis added that the municipality would make an effort for Athens to host the 25th general assembly of the Council of European Municipalities and Regions in 2012.

Tourism Among Priorities On PM’s Agenda