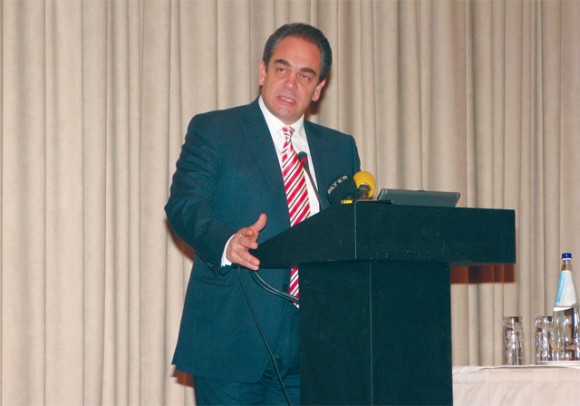 At the conference the president of the Athens Chamber of Commerce and Industry, Konstantinos Michalos, referred to the issue of the tourism chamber and stressed that its creation would not be an advisable solution to fight the crisis. “These times require forces to be united, rather than divided for personal goals,” he said.

Hotel suppliers in the tourism industry may count up to a 275-million-euro fall in revenue this year if, according to a possible scenario, Greek tourism slumps 10 percent in overnights, GBR Consulting reported recently.

GBR presented a study at the Expro conference last month and recorded the impact of the crisis for the industry suppliers in economic terms.

Constantinos Tsigaridas, president and managing director of Expro, referred to the panic that was caused within the industry once predictions made note of a 25 to 40 percent decrease of incoming tourism.

“This is why we judged that there is no reason to hold the two international exhibitions EXPRO & CLEAN that had been scheduled for January 2009,” he said.

One of the main speakers of the conference, Minister for Employment and Social Protection Fani Palli-Petralia, referred to the decision of some hotel owners not to operate during the months of April and May.

“If the hotels do not operate throughout the whole season the seasonal workers will not have enough wages to qualify for the unemployment benefit,” Mrs. Petralia said. (Seasonal workers must collect seven months worth of wages.)

The minister stressed that not one day of wages should be lost for seasonal workers, “so they can receive the benefit for the period during which the hotel unit does not operate.”

Mrs. Petralia also noted that for 2009 the number of people eligible for social tourism would be 700,000 from 400,000 last year, in an attempt to boost domestic tourism.

On his part, president of the Panhellenic Federation of Hotels, Andreas Andreadis, stressed that hotel reservations were currently 20 percent down from the same period last year.