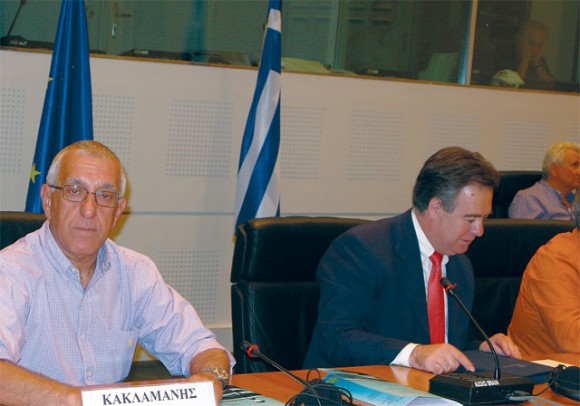 The president of KEDKE Nikitas Kaklamanis commented that the abolition of the sojourn tax has been a timeless request of hoteliers, “even when tourism had seen a 20 percent increase.”

No provisions will be brought to parliament for approval of the reduction of the sojourn tax -imposed on private businesses that operate in tourist regions- before consultations are held with municipal authorities, Tourism Minister Kostas Markopoulos recently told the president of the Central Union of Municipalities and Communities of Greece (KEDKE), Athens Mayor Nikitas Kaklamanis.

The tourism minister’s promise follows KEDKE’s negative response to the prime minister’s announcement that the sojourn tax will be reduced from two percent to 0.5 percent.

The Hellenic Chamber of Hotels said that the sojourn tax is an abusive and unjust fee imposed on the hotel industry.

“These charges are supposedly imposed to cover the increased requirements of local authorities that result from tourist traffic in various areas,” said the chamber’s president, Gerassimos Fokas.

The president underlined that no one knows exactly how much money the local authorities offer to tourism in regards to service improvement from the taxes collected from the enterprises.

As for KEDKE’s comment that hotels collect the sojourn tax by charging customers, Mr. Fokas replied: “this is a myth.”

The Panhellenic Federation of Restaurants and Related Occupations (POESE) on their part commented that the prime minister’s announcements should not be doubted nor put up for negotiation.

The Association of Greek Tourism Enterprise’s also referred to the matter and emphasized that the local government plays a very important role and therefore their requests should be heard by the government but not at the expense of tourism businesses that contribute positively to the development and prosperity of local communities.

On its part, the National Association of Catering and Entertainment Establishments (PASKEDI) criticized KEDKE’s attitude.

According to PASKEDI, the municipalities have been collecting the sojourn tax since 1954 and -after a series of amendments to the legislation- have received billions of euros from the tourism industry.