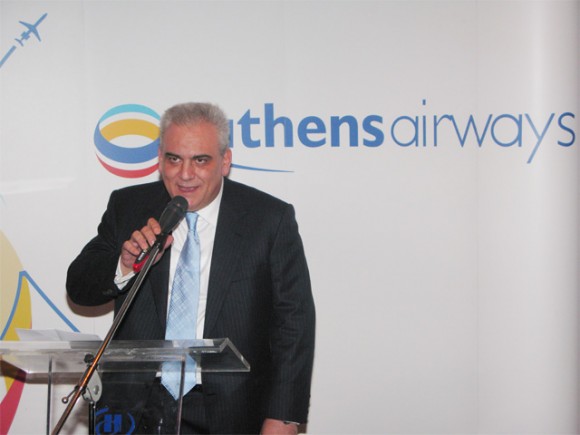 We will fly to destinations that are not serviced adequately nor frequently, initially within Greece and very soon abroad,” said Athens Airways owner and CEO, Sakis Andrianopoulos, at the presentation of the carrier’s program and services.

New private airline Athens Airways announced recently that it intends to raise the bar of Greek air service quality and aims for a five to 12 percent share of the domestic passenger traffic.

Scheduled flights to Alexandroupolis (21 flights a week) have begun as of the end of January, while February saw the launch of routes to Kavala (one flight daily) and Mitilini (12 flights a week).

Flights to Thessaloniki (three flights daily) are to begin on 12 March.

Athens Airways will also introduce flights to Kefalonia, Chania, Heraklio, Mykonos, Rodos, Santorini and Zakynthos, while flights to Chios, Kastoria and Kozani are also under discussion.

“As of this summer we aim to increase our destinations as well as the frequency of daily flights so as to accommodate the increased travel traffic during that period,” said the airline’s owner Sakis Andrianopoulos.

At the moment, the airline’s fleet consists of one aircraft type ERJ-145 jet of Brazilian aircraft manufacturer Embraer and the company is soon to receive another three.