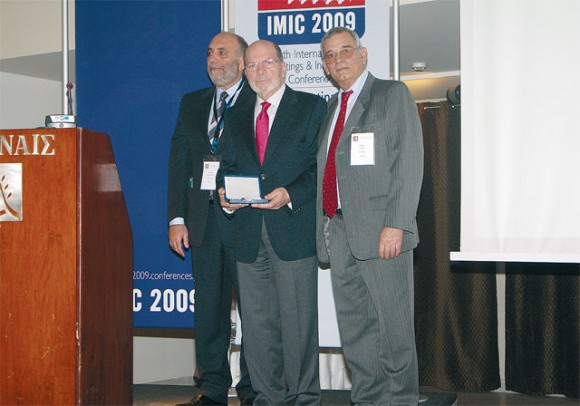 Tassos Koumanis (center), founder and president of Xenia Exhibitions-Conferences. On his left is Kostas Konstantinidis, chairman IMIC advisory board, and on his right is Tassos Pappas (CITE), president SITE Greek Chapter.

Advice on discovering what exactly today’s client needs, along with a better understanding of the industry requirements of tomorrow, and networking tips were also presented.

The presentation of tourism and marketing consultant, Dimitris Koutoulas, raised eyebrows as he clearly passed the message that the operation procedures the tourism ministry and the Greek National Tourism Organization follow stand as an obstacle to Greek tourism’s development.

Titled “Common sense as the catalyst for reforming Greek tourism policy,” the presentation emphasized the fact that the recent riots in Greece found the country totally unprepared.

Mr. Koutalas stressed that as of 2002 the state proposed the establishment of a Crisis Management Committee only to actually set it up in August 2008, following the casualty of an Australian tourist on the island of Mykonos.

“Since then, though, the committee has yet to be institutionalized,” he said.

Another “sore spot” of Greece’s tourism policy is its online presence, which according to Mr. Koutoulas, is poor and not user-friendly.

He stressed that foreign journalists have no use for it as the ‘press office’ section not only is hard to find but also refers exclusively to the activities of the elected minister and not general tourism issues.

Also mentioned were the current marketing procedures the ministry follows and it was agreed upon that the state chooses expensive advertising campaigns that ultimately do not deliver the desired result.

“Professionalism must be entered into the public sector and this can happen only if political persons are not involved in technocratic issues and an ideal organizational structure is introduced,” Mr. Koutoulas said.

Another idea was for municipalities to take initiatives for Greek tourism promotion and not wait for the state to do everything.

“One example is the City of Athens’ initiative with the creation of the Athens Tourism and Economic Development Company, which presents Athens as a dynamic European metropolis and a competitive tourism and convention destination,” he said. 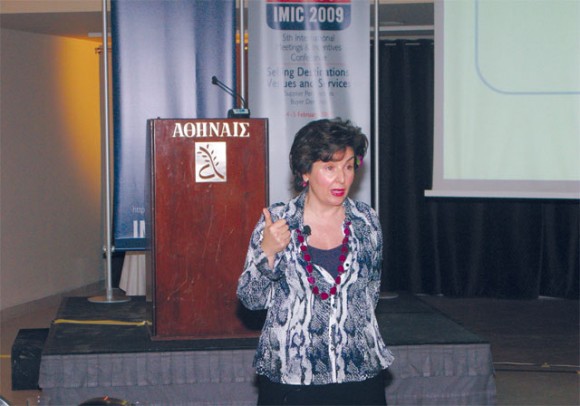 During her presentation, titled “How to tell the story,” Linda Pereira, executive director of CPL Events in Portugal, informed the audience that when presenting a country as a product, it is not different than telling a story to an audience. “At tourism exhibitions it is essential that everyone representing a country tells the same story,” Mrs. Pereira stressed that coordination must exist among the state, local governments and tourism organizations.

In his conclusion, Mr. Koutoulas wondered if it is possible for tourism to be “released” from state control and necessary decisions be implemented by the private sector.

Georgios Drakopoulos, general manager of the Association of Greek Tourism Enterprises, from another point of view, said that the private sector is not ready to undertake such a task.

During his presentation, titled “Tourism development without methodological approaches: lots of administration but almost no vision,” Mr. Drakopoulos invited the audience to proceed with an interactive dialogue about the future of Greek tourism.

“After the riots of December 2008 and the farmers conflict with the government Greece’s image is even lower than it was during the pre-Olympic period,” Mr. Drakopoulos stressed.

Mr. Drakopoulos said that the one positive aspect is that the government has finally understood the importance of tourism to the Greek economy.

“It is not a coincidence that the prime minister announced measures to boost tourism and not some other industry,” he said.

In regards to other presentations, ideas on “selling” Greece as a destination and convention venues were exchanged.

The president of the Greek Chapter of the Society of Incentive and Travel Executives, Tassos Pappas, focused on the power of incentive travel as a business tool. Mr. Pappas underlined that the main issue is to appreciate the client’s needs and then proceed with incentives offers.

In reference to the ecomonic crisis, Mr. Pappas said that a 2007 Incentive Travel Survey suggested “survival strategies” for businesses.

These strategies suggest that businesses should invite fewer qualifiers, choose less expensive destinations or hotels, shorten the length of stay and cut-back on on-site expenses.

Also, during the session on destination marketing and branding the cases of Milos and Laconia were analyzed, while the conference also focused on the destinations of Lesvos, Drama and Evia.