During the handover ceremony for the tourism ministry, the outgoing minister congratulated his successor, and stressed that his arrival coincide’s with the prime minister’s 14 support measures for Greek tourism.

The new education minister said that the 14 measures have a financial content of 257 million euros and therefore should be able to strengthen the defenses of the Greek tourism product.

“The more we intensify our presence in international exhibitions and the more powerful and visible the image of Greece is, the more Greek tourism and the Greek economy will be promoted,” he said.

On his part, new Tourism Minister Kostas Markopoulos said that he is determined to achieve the “task” the prime minister entrusted him with as he has entered a ministry of capable management and high goals.

Meanwhile, tourism experts predict that 2009 will be a “difficult” year for Kostas Markopoulos since Greek tourism will enter perhaps its most arduous period in recent years.

Apart from the implementation of the 257-million-euro tourism support measures, they said, Mr. Markopoulos would have to proceed directly to the realignment of the tourism strategy given that time is pressing since early bookings for the new tourism season (mid-March) are less than they were in the corresponding period last year.

Kostas Markopoulos, a thoracic and vascular surgeon by profession, was born in Athens on 28 December 1960. 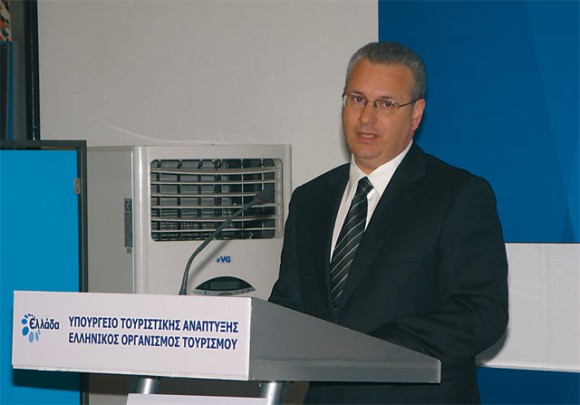 Tourism Minister Kostas Markopoulos promises to meet the expectations of Greek citizens in regards to the tourism development of the country.

Mr. Markopoulos is a graduate of the University of Athens Medical School and studied at the University College Hospital (UCH) in London and attended postgraduate studies at the Montefiore Medical Center in Pittsburgh.

During his years in medicine he practiced general surgery at the Metaxa Hospital and the Greek Red Cross Hospital and from 1993-1999 he was the medical registrar of the Pendeli General Hospital for Children. From 1990 to 2004 he was the director of the Athens Central Clinic.

His involvement with the New Democracy political party dates back to his university years (1982). In 2004 he was elected as Evia’s MP for the party. During the 2004-2007 parliamentary period, Mr. Markopoulos participated in the Social Affairs Committee, the Environment Committee of Parliament and the Committee on the Review of the Constitution.

He was re-elected in 2007 and was a member of the committees of Social Affairs, Defense and Foreign Policy, and Review of the Constitution.

On 12 May 2008 he was appointed deputy representative of parliament.

Besides his native Greek, he speaks English and French.