Lefkada Stands Up to Economic Crisis 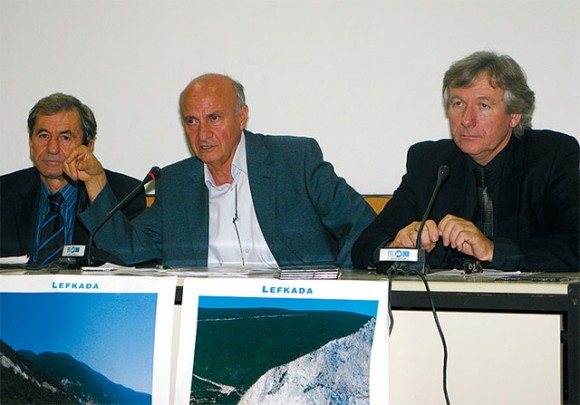 Yiannis Kartanis, prefect advisor and president of the Lefkada Hotelier Association; Yiorgos Logothetis, mayor of the Apollonion municipality; and Yiorgos Kourtis, president of the Local Union of Municipalities of Lefkada. At the press conference it was announced that the Municipality of Apollonion on Lefkada would be honored with the “Gold Quality Management” award in Madrid at the 34th International Tourism, Hotel Unit and Catering Industry awards ceremony on 28 January 2009, within the framework of the International Tourism Trade Fair Fitur in Madrid.

The prefecture and the Local Authorities Union of Lefkada held a press conference recently where the prospects of tourism development for the island in 2009 were discussed.

As it was announced, for the 2009 tourist season, Lefkada will approach the Balkan market through the Egnatia Odos motorway while local tourism professionals (hotels and rooms) have assured that prices would be kept low in order to face the affects of the global economic downturn in tourist traffic.

One of the topics discussed was the requested improvement of the troubled air connection of Lefkada with Thessaloniki and Athens.

According to official data 70 percent of tourists arrive to Lefkada by road while only 30 percent arrive by air.

The prefect advisor and president of the Lefkada Hotelier Association, Yiannis Kartanos, and the chairman of the island’s Union of Rented Rooms, Spyros Gazis, called for the Greek National Tourism Organization to crack down on tourist accommodations that continue to operate without proper licenses.

The sub-letting of non-registered luxury homes that are built or bought by foreigners on the island was also a topic for discussion as a loss of income for the local government was reported.

In regards to this year’s tourist traffic, Mr. Kartanos estimated that it would move on the same level as 2007, despite the negative impact noticed during the summer due to rumors of possible earthquakes.

The mayor of the Apollonion Municipality, Yiorgos Logothetis, stressed about the island’s needs.

The mayor said that many times local government sees the tourism ministry as an “enemy” since many of Lefkada’s requests have gone unheard.

“How is it possible for the tourism ministry and the ministry of environment, physical planning and public works not to be interested in the Porto Katsiki beach for example?” Mr. Logothetis wondered.

“We are trying to convince them that this ‘treasure’ does not only belong to the Apollonion Municipality but to all of Greece,” he said.

At the conference, it was announced that Lefkada would participate in upcoming tourism exhibitions in Belgrade and Ljubljana as well as in the Balkans through the Ionian Islands Region.

In addition, within the framework of the “Ocean Festival,” the Apollonion Municipality will organize a tribute to Pontic Hellenism and a promotion of the common points of the Ionian Sea and the Black Sea.

He also informed journalists that for the 2009 season, TUI would promote vacation packages.

The island’s capacity of tourism accommodations is approximately 5,000 hotel beds within two- to five-star units, and 15,000 beds in rooms to let.

The association said that in recent years a large interest has been recorded for four- and five-star hotels (this year 250 five-star beds were added) and for rented rooms.