The president of the Athens-Attica Hoteliers’ Association, Yiorgos Tsakiris, recently presented the results of a study on Attica hotel progress as well as the level of customer satisfaction for hotels in Attica. 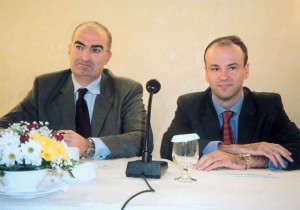 The 2008 study showed a slight to significant drop in satisfaction ratings in relation to the first survey in 2005 while the level of general evaluation (on a scale of 4.5 to 8.5) declined from 7.56 to 7.22.

And like previous years there is a very low rate in security, sanitation, pollution, public transport and city infrastructure while the score for private establishments (hotels, shops, restaurants) and the airport is on a satisfactory level.

The study, conducted by GBR Consulting, also showed a significant reduction of conferences and events in Attica this year, mainly due to the absence of a main promoter of the destination and the non-operation of a main conference center.

The study underlined that the only “light in the tunnel” seems to be the motivation noticed in general by the City of Athens on tourism issues and with the creation/operation of the Athens Convention and Visitors Bureau (CVB).

Mr. Tsakiris said the association believes that after the positive division of the Greek tourist product into many thematic tourism forms the next step is for the state to supervise the development of local agencies concerning the management and organization of destination promotion.

“Let us not forget that the creation of (independent) prefectural committees for the promotion of tourism has not convinced us that it can serve the tourism purpose in the best possible way,” said Mr.Tsakiris.

“By contrast, in most cases they lead, with few exceptions, to uncoordinated and inefficient actions and also to the fragmentation of precious and scarce tourism resources.” 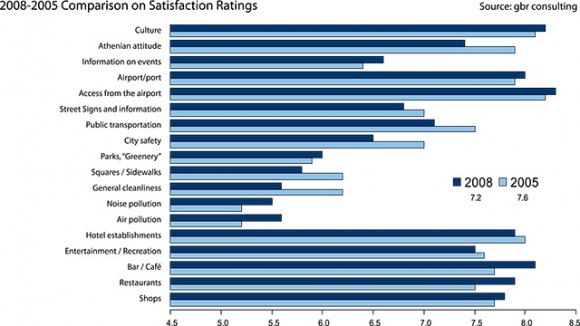 Mr. Tsakiris said that such committees are obsolete and in any case probably serve local level political purposes, which has nothing to do with tourism.

The present data of the study also shows that in 2008 Attica follows the path of Europe in hotel occupancy and the average price per room as it appears that the current tourism product has exhausted all potential for further growth.

With regards to price/quality ratio for hotels, shops, restaurants and cafe/bars the study showed a drop from 7.6 to 7.5 when 2008 was compared with 2005.

Athens Not a Business Center

Foreign Arrivals for 2009 Predicted to Fall