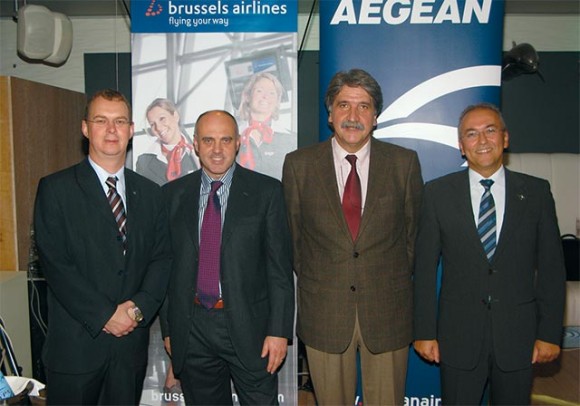 Aegean Airlines recently signed a commercial cooperation agreement with Brussels Airlines that includes the operation of the route Brussels-Athens.

January 2009 will take off with the code share that will allow Aegean Airlines to promote Brussels as a new destination within its international network. This partnership agreement sees the commercialization of both airlines offer between Greece and Brussels.

Aegean Airlines will sell seats on the daily flight operated by Brussels Airlines between Athens and Brussels, while the partnership also allows Brussels Airlines to offer three new onward connections to Thessaloniki, Heraklio (Crete) and Rodos via a transfer to Athens.

“We are very happy with this new important partnership, which will allow us to extend our European network and reach the heart of Europe,” said Dimitris Gerogiannis, CEO of Aegean Airlines.

Aegean Airlines will also introduce a daily flight to Brussels as of summer 2009, along with the addition of flights to another four European destinations: Berlin, Barcelona, Vienna and Venice.

All flights will be performed exclusively with the new Airbus A320/321.