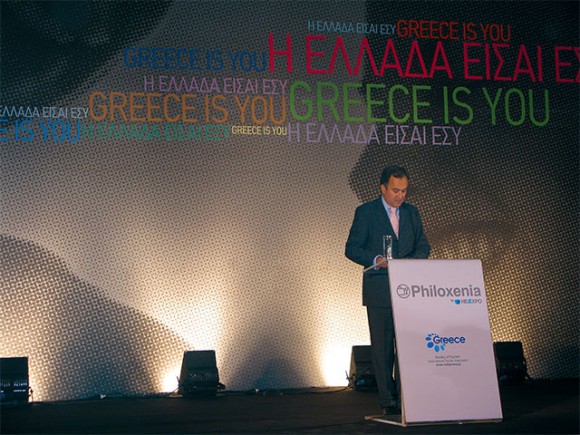 Aristotelis Thomopoulos, president of Helexpo, inaugurates the 24th Philoxenia tourism exhibition. During his speech, he underlined the fact that this year’s exhibition is improved and more commercial given the participation of 25 foreign countries, the high attendance of tourism agencies and the strong presence of the hotel equipment exhibition Hotelia and the Philoxenia Spa Expo. In the background is the proposed new slogan for Greece’s new promotional campaign: “Greece is You.”

This year’s Philoxenia International Tourism Exhibition sported newly designed modern stands, welcomed a continual arrival of visitors, boasted a huge increase in trade visitors, and wrote up what appears to be a record number of business agreements.

And although tourism professionals focused their discussions on the global economic crisis, the 24th Philoxenia proved impressive compared with previous years.

As well, Aristotelis Thomopoulos, president of Helexpo, underlined the fact that for the last four years the Philoxenia tourism exhibition has attracted more attention from abroad and has developed an even stronger role in the wider region of Southeastern Europe.

“This is evident as this year’s Philoxenia saw the participation of 820 exhibitors, up from 803 last year, of which 120 come from abroad, compared with 113 at last year’s event,” he said during the fair’s opening ceremony.

According to Mr. Thomopoulos, due to the current crisis that has afflicted the global economy, such tourism exhibitions offer support to the business market.

“For this reason, the participation of enterprises and sectoral bodies in exhibition events, such as Philoxenia, should be a top priority as it addresses trends and prospects in the worldwide and domestic tourism industry amid the global economic crisis,” he said. 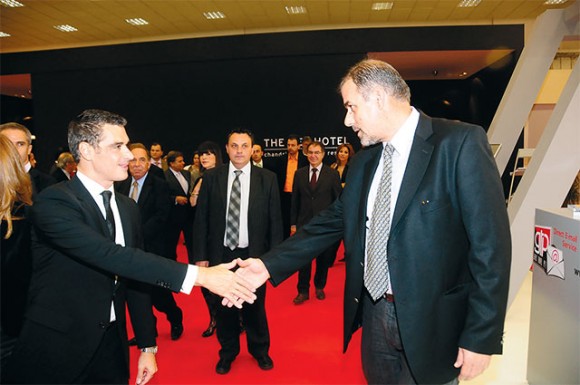 During the inauguration ceremony, Tourism Minister Aris Spiliotopoulos stressed his ministry’s intention to take all necessary measures to defend the Greek tourism product against the global crisis.

The minister said that the strategy for 2009 will be distinguished by two phases.

The first will include specific actions aimed towards traditional markets such as the UK, Germany and the United States.

The second phase of the 2009 strategy aims to enhance a direct approach towards emerging markets of Eastern European countries (Russia, Ukraine, etc.), as well as China and India where the Greek National Tourism Organization plans to open offices soon.

The tourism minister underlined that tourism is a national matter and he announced the implementation of a national plan for tourism reform.

“For this reason we will organize the first business forum on the national plan for tourism reform in the near future and the main aim will be to demonstrate the vital importance of tourism to the country’s development.”

One of the exhibition’s main side events was the 1st European Tourism Conference “Quality in Tourism and Development Perspectives,” organized by Helexpo and Europress Media Group. 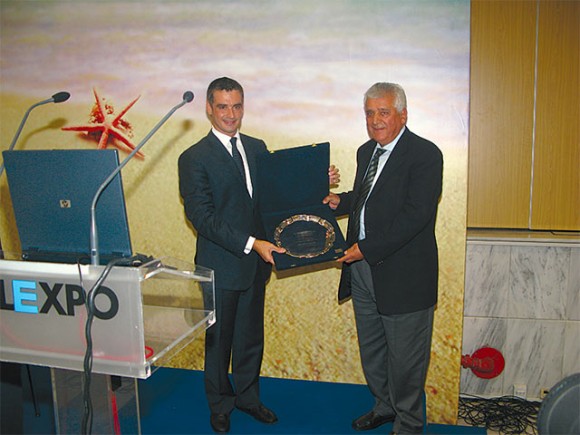 The Hellenic Hotel Federation’s honorary chairman and president of the Rhodos Hoteliers Association, Vasilis Minaidis, received an honorary plaque from Tourism Minister Aris Spiliotopoulos for his valuable presence within the hotel industry. The award was given within the framework of the federation’s presidents meeting during the Philoxenia exhibition.

The conference, which aimed to underline and indicate the importance of quality in attracting visitors either for business or leisure purposes, was divided into four thematic sections: Congresses & Incentives Tourism; Therapeutic & Spa Tourism; Agritourism; and Technology & Tourism.

During the conference, the president of the GNTO, Athanasios Oikonomou, noted that the international economic crisis is expected to affect Greek tourism revenue, although arrivals are expected to remain at last year’s levels.

“We are not concerned about arrivals, which should not be different from last year, but overnights may be reduced as well as the tourist spending and consequently revenues,” he said.

Mr. Oikonomou underlined the fact that large foreign tour operators have assured that they will not reduce charter flights to Greece.

The president stressed his hope that the hotel industry will show restraint in 2009 and not repeat the price increase (up to 15 percent in many cases) seen in 2008.

Mr. Astras said that the estimated annual turnover of global conference tourism exceeds 200 billion euros and he made reference to future coordinated movements that are foreseen by the tourism ministry. 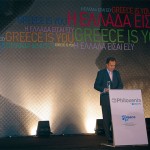 Aristotelis Thomopoulos, president of Helexpo, inaugurates the 24th Philoxenia tourism exhibition. During his speech, he underlined the fact that this year's exhibition is improved and more commercial given the participation of 25 foreign countries, the high attendance of tourism agencies and the strong presence of the hotel equipment exhibition Hotelia and the Philoxenia Spa Expo. In the background is the proposed new slogan for Greece’s new promotional campaign: “Greece is You.” 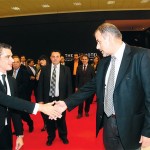 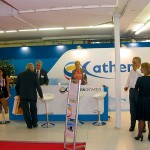 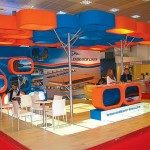 Endeavor Lines will strengthen its presence in Brindisi, Italy, from June 2009 with the launch of a fourth ship on the route. Endeavor has already begun to work on the formation of a new company-owned terminal that includes parking spaces in Brindisi port. "We want to upgrade the port and make the stay of our passengers and their vehicles easier and more pleasant," said the company. 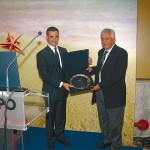 The Hellenic Hotel Federation's honorary chairman and president of the Rhodos Hoteliers Association, Vasilis Minaidis, received an honorary plaque from Tourism Minister Aris Spiliotopoulos for his valuable presence within the hotel industry. The award was given within the framework of the federation's presidents meeting during the Philoxenia exhibition. 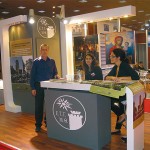 Theologis Viron, general secretary of the Macedonia-Thrace Travel Agencies Association, with daughters Georgia and Christina, at the association's stand that won a Philoxenia award. For 2009, the association will emphasize religious tourism as it announced the joint participation of Greece and Bulgaria in the operational program Interreg III "Integrated Program for the Development of Cross-border Cooperation in the field of Religious Tourism between Greece and Bulgaria." The purpose of the program is to record religious monuments that exist in both countries and to trace the routes of their location. The purpose of this program is to boost the attendance of visitors of religious tourism. 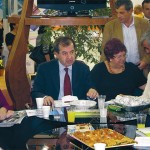 The prefect of Xanthi, Yiorgos Pavlidis, spoke to journalists in regards to the prefecture's tourism product. Mr. Pavlidis said that Xanthi is now a well-established all-year-round destination and ideal for weekend getaways. He made reference to the comparative advantages of nature, the well-preserved traditional buildings that are combined with modern infrastructure, the hospitality of the locals and stressed that the prefecture still has room for growth to the advantage of employment opportunities and the region's economy. He also analyzed planned future actions and projects to continue the development of tourism in Xanthi. The stand of the prefecture of Xanthi won one of Philoxenia's Best Creation awards. 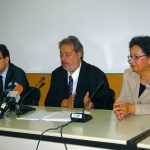 Prefect of Kozani, Giorgos Dakis, and general secretary of the Region of Western Macedonia, Andreas Leoudis, at a press conference on the region's plans to become an all-year-round destination. Mr. Leoudis announced that the initial estimated budget for the prefecture's fourth ski center—to be constructed within the Pieria Mountains, northwest of Olympus—of some 30 million euros has gone up to 100 million euros. The ski center will be located at the Velvedou site. 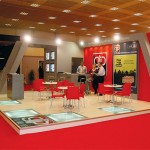 GTP continues tradition with yet another new and modern stand. The tourism trade's magazine has exhibited at each and every Philoxenia fair since its beginning in 1984. 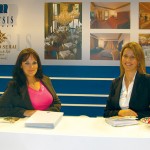 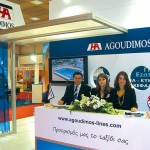 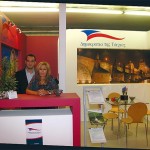 Goldair's staff member, Damianos Prokopidis, and public relations manager, Margarita Zambeli, at the stand of the Czech Tourist Authority. According to figures, the amount of Greeks who visited the Czech Republic in 2007 amounted to 61,795 and made 191,656 overnight stays, an increase of 112.6 percent compared with 2006. 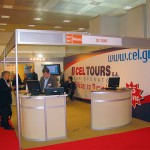 During the Philoxenia exhibition Cel Tours travel agency informed visitors on their holiday offers to the Far East, the Caribbean and to destinations in the Indian Ocean. 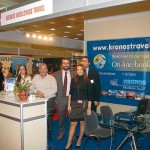 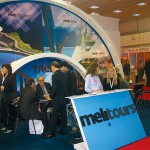 Among Meli Tours' winter offers are special rates to the 3-star Paradise Bay hotel in Kassandra, Chalkidiki, until the end of the winter period (except Christmas and New Year's Eve). 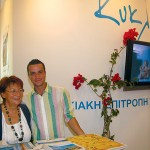 The Cyclades Development Company's manager for tourism issues, Eleni Prochori, and business consultant, Nikolas Emmanouil, at the stand set up by the Prefectoral Committee of Tourist Promotion of the Cyclades. 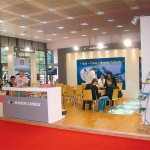 Anek Lines (the company's stand won a Philoxenia award) recently added the refurbished F/B Elyros to its fleet and according to managing director Yannis Vardinoyannis: "The Elyros is one of the largest and most luxurious ships that sail the Greek seas and I am totally convinced that the Elyros will contribute considerably to the modernization of our coastal lines and enhance the continuous effort of Anek Lines to upgrade the tourist product of Greece." 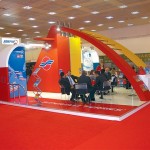 Attica Group's Superfast and Blue Star stand. At Philoxenia, the Blue Star Ferries' staff distributed a brochure that informed visitors of the company's services for the new season and the Hotel & Ferry program for the period November 2008-March 2009. The program is aimed at the promotion of Greek islands as winter destinations. 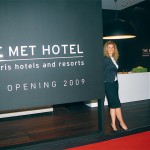 Victoria Lygizou, MICE representative of the 212-room 5-star Met Hotel (member of Chandris Hotels & Resorts) was on call to assist visitors of the hotel's stand, which was one of the winners of the exhibition's Best Creation category. The hotel is to open in the new harbor area of Thessaloniki in summer 2009. 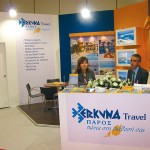 Maria Stamouli, reservations specialist, and Giorgos Gavalas, ticketing department supervisor, at the stand of Paros-based Erkyna Travel that claims to be "always at your disposal" on Paros Island.