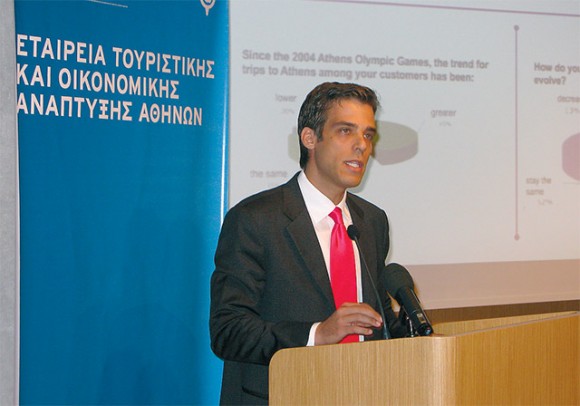 ATEDCO’s chief executive, Panagiotis Arkoumaneas, announced the inauguration of info point booths for visitors of the city that are to operate as of this November at the Athens International Airport. This will be the first booth of an integrated network of info points that is to be developed within all areas of tourist interest in Athens.

The newly established Athens Tourism and Economic Development Company (ATEDCO) recently announced its aim to promote Athens on an international level and include the capital among the top destinations for city and business tourism.

The mayor of Athens stressed that the company’s establishment officially marks the strong influence the City of Athens has on the city’s tourism development: “I am positive that the Athens metropolis has all the essentials to become a top destination and that the Tourism and Economic Development Company will be the key instrument to achieve this goal.”

The chief executive of the company, Mr. Arkoumaneas, stressed the importance of tourism in relation to the city’s economy and referred to the company’s purpose as an official tourism body for Athens.

According to Mr. Arkoumaneas, in only a short period of operation, ATEDCO has designed and has begun to promote the city’s communication identity under the tagline “breathtaking Athens” through a series of planned actions.

These actions include the launch of two official websites that represent the cutting edge of a dynamic and interactive communication strategy: the www.breathtakingathens.com site, which is addressed to a wide audience and potential visitors to the city, and the www.athensconventionbureau.gr site that is addressed to the professional market for business and conference tourism.

Other actions include a series of information material; participation in major international tourism and business exhibitions; and the implementation of a plan targeted at international media publicity (inserts, tributes, publications, etc).

ATEDCO also produces a special magazine under the title “breathtaking mag” that is published every three months and sent to thousands of recipients abroad.

In addition, ATEDCO is responsible for the operation of the Athens Convention Bureau (ACB), which as of last April promotes Athens within international markets and serves all foreign companies interested in organizing conferences or events in the capital.

The president of the Hellenic Association of Professional Conference Organizers, Dinos Astras, hailed the City of Athens for its substantial contribution to the tourism development of the capital.

“The members of the association feel optimistic as the Athens Convention Bureau will promote conference tourism in Athens, something that the industry had requested for many years,” Mr. Astras said.