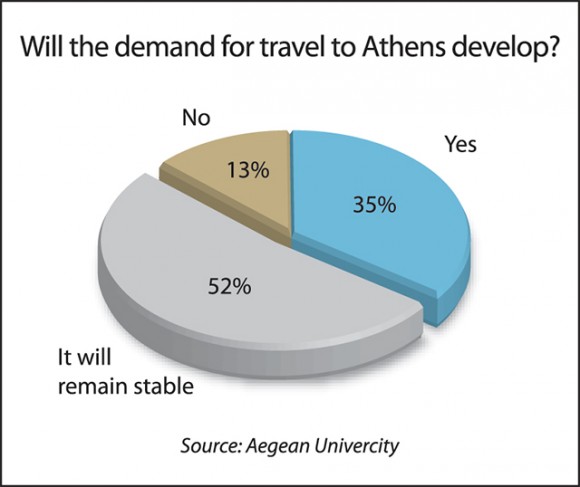 A recent study shows that tourists to Greece’s capital spend more money, visit more sites and keep hotels more profitable, and it appears that the trend will continue.

According to a study entitled ‘Registered Athens Tourism Study – from pre-Olympic to the post-Olympic period: The influence of the Olympic Games and the current situation, strategic priorities, prospects, challenges and future actions for the next 5 years (2008 -2012),’ tour operators from abroad believe that Athens will continue to attract top market visitors.

Forty-one tour operators were asked to participate in a research survey -conducted by the Aegean University Business Administration Department- and were asked to evaluate the impact of the 2004 Olympic Games in Athens on the city’s tourism image based on a scale from -5 (a very negative impact) to 5 (a very positive effect). 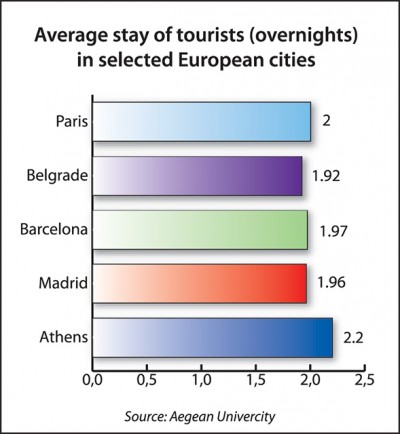 The average score was 2.7, which shows that the Games upgraded the validity of Athens on the international tourist market. Six out of the 41 tour operators believed that the 2004 Games did not help or that they even created a negative impact on Athens. However, the majority considers the impact of the Games positive.

Forty-five percent of the tour operators said that the trend for trips to Athens among their customers was higher when compared with other urban destinations.

However, 20 percent of those surveyed found the exact opposite, namely that Athens is not a popular destination as customers opt for trips to other cities. The remaining 35 percent said popularity of Athens with customers remained stable.

As for the progress of Athenian tourism, 52 percent stressed that the future demand for travel in Athens will maintain the same levels as today, while 35 percent calculate an increase. Thirteen percent foresee a reduction of the tourist traffic to Athens.

When Athens’ tourism performance is compared against that of other European cities, a general decline in tourist traffic is noticed after 2001 (the year of 9/11) not only in Athens but also in cities such as Amsterdam, London and Prague.

However, this reduction proved to be temporary and after one or two years tourism began to recover and produce an upward development trend.

Athens was found to be in a rather privileged position when compared with other cities in regards to the average stay of tourists.

With an average stay of 2.2 nights, Athens has a slightly better performance than other cities such as Paris, Belgrade, Barcelona and Madrid, whose average stay is approximately two nights.

Figures released by municipal tourism organizations on hotel occupancies show that Athens’ tourism performance is considered satisfactory (due to the fact that the city avoided the addition of a barrage of new hotel beds for the Olympic Games). 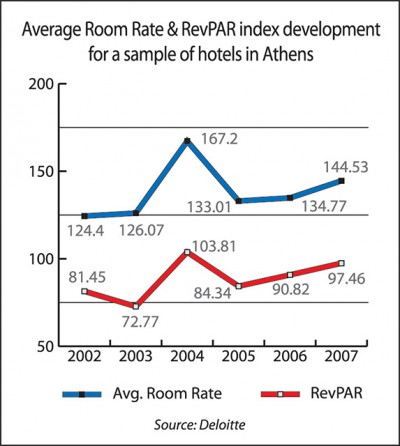 As for revenues per available room (RevPAR), the study produces figures for a more comprehensive evaluation of the progress of the hotel industry.

The study carried out by the British consultancy company Deloitte shows how greatly the efficiency of Athenian hotels improved after their very low performance in 2003.

And from various methods used by Greek professional organizations it was found that from 2003 to 2007 there was a rise in the amount of money spent by visitors to the capital (see chart below).

The study also included figures in regards to museum and archaeological site visits. After a period of unsystematic visits to all sites of Attica during the 1998-2002 period, and then the collapse of visits in 2003, a continuous increase of entrance tickets was noticed from 2004 and onwards.

The increase in 2004 can be attributed to almost half a million tickets that were sold for National Gallery exhibitions, while the increase from 2005 and onwards was due to a sharp rise in traffic to Greek archaeological sites and mainly to the Acropolis. 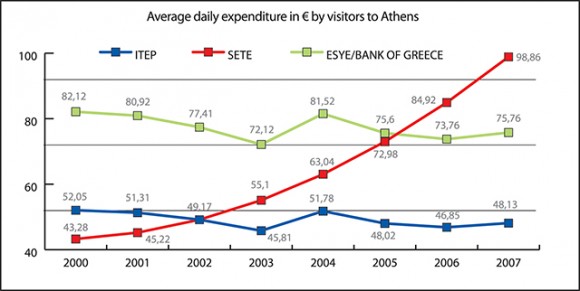 As of 2005, the Acropolis recorded an increase of 70 percent on entrance tickets. (However, recent figures released by the Greek National Statistical Service showed that museum visits dropped 43.5 percent during the first four months of this year against the same period in 2007. Archaeological visits also saw a 41.1 percent decline in visits during the January-April 2008 period when compared with the year before.)

The study was released by the Athens Tourism and Economic Development Company in the context of the creation of a ‘tourism observatory’ for the City of Athens and was conducted in cooperation with the Institute of Tourism Research and Studies of the Aegean University Business Administration Department.