Because government fails to enact in unison the tourism sector fails to perform at an acceptable level, says the Association of Greek Tourist Enterprises.

At a press conference the association urged the government to give the tourism ministry more power and more resources.

“If the inadequate attitude of the government is overturned Greek tourism can cover (with its climatic, geographical and cultural advantages) many gaps that occur in all macro economical figures of Greece directly and through the aid it offers in other sectors of the economy,” said the association’s president, Nikos Aggelopoulos.

“If we continue to remain inactive on decisions for serious measures for the development of the tourism sector through a targeted central policy, positive results will be impossible.”

According to the president, regardless of the tourism ministry’s efforts to promote the Greek tourism product over the past years, this can not alone change the current situation of poor performance and deliver the necessary benefits to the economy. 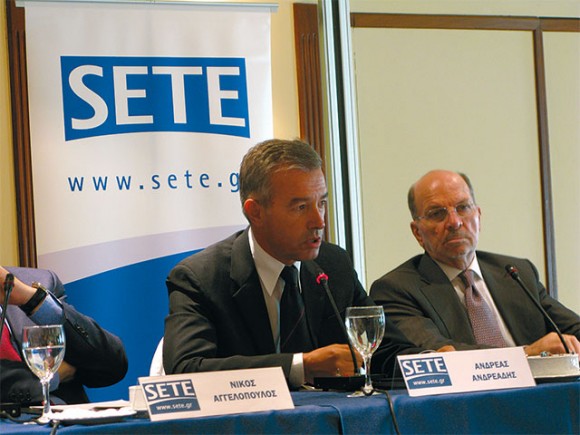 Andreas Andreadis, vice-president of SETE and president of the Hellenic Hotel Federation, made reference to the common real estate tax (ETAK) and sojourn tax that are imposed on the hotel industry. In regards to the federation’s aim to lift the sojourn tax, Mr. Andreadis noted that their aim is not to deprive finances from local government, but to find a fair competition model for all.

The association says the competitiveness of the tourism economy is in danger and is threatened by a series of failures and delays in regards to the actions of other co-competent ministries.

It proposes that a number of small-scale responsibilities that up until now belong to co-competent ministries can easily be passed to the tourism ministry.

“On the other hand, key responsibilities on tourism issues that require the cooperation of other ministries should be put under the coordination and responsibility of Prime Minister Kostas Karamanlis,” said Mr. Aggelopoulos.

The association’s president believes that only the prime minister can impose the political will he himself has repeatedly expressed and thus make tourism the pillar of Greece’s economic development.

Mr. Aggelopoulos spoke of the government’s position that is “against monopolies and in favor of fair and free competition,” but maintains and extends its monopoly on ground handling at 33 airports. Similarly, in coastal shipping, the government is unable to implement European legislation as it gives continuous extensions to a scheme that is anything but “healthy competition.”

The association believes that the co-competent ministries and representatives of the private sector should work together in order to find rational solutions for Greek tourism’s benefit.

As for the government’s “excuse” in regards to poor tourism performance due to the expensive euro, Mr. Aggelopoulos called this an “easy alibi.”

On this matter he quoted German newspaper FVW that published a recent report on the German’s tourism preferences.

EU-member Spain recorded a significant increase of 29.4 percent and became the top country German tourists are interested in, followed by Non EU-members Turkey and Egypt with percentages of 21.1 and 10.5 respectively.

Greece showed a considerable drop, as the preference rate fell from 16.6 percent (produced July 2007) to 9.1 percent.

“Apart from Spain, Italy and Portugal also showed an increase in preference rates even though these countries are, like Greece, members of the euro zone,” the president stressed.

“So the problem of the ‘expensive euro’ is neither a negative catalyst nor a country holiday selection criterion.”