Greek Tourism Industry Can Do Better in ICT Use

According to a recent study conducted by the Observatory for the Greek Information Society in regards to the use of information and communication technologies (ICTs) by the tourist industry, large tourism companies show a positive attitude towards new technologies but there is still room for improvement.

Data from the study show that access to the Internet and generally the use of new technologies is significantly higher within large tourist units and enterprises active in Central Greece and the Greek Islands.

In addition, it was found that there is a significant higher level of the use of ICTs in hotels than in rooms-to-let in fields of computer and Internet access; specialized applications such as online sales/purchases; Customer Relationship Management solutions and Enterprise Resource Planning solutions.

In terms of promotion through a private website, it is an option chosen by 63 percent of hotels and 30 percent of rented rooms, while businesses that prefer to advertise on other websites amount to 46 percent and 33 percent respectively. Overall, entrepreneurs have a positive attitude towards the development of private websites and advertising via promotional websites. 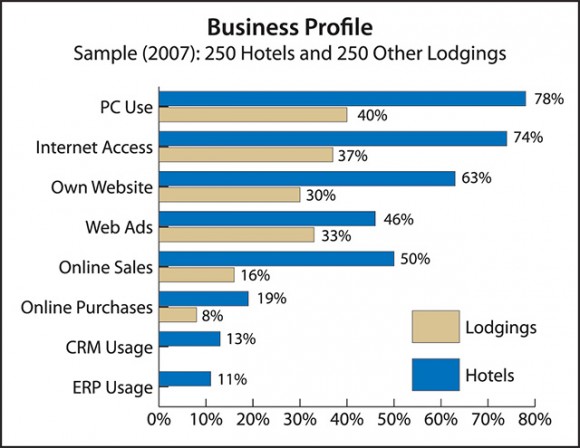 However, the majority of the websites operate for promotional purposes, as they provide impressive photographs and plenty of information that is available in both Greek and English, but show no indication of frequent updates of the provided content.

Transactional and interactive services are offered to a limited extent, which concludes that business operators are not familiar with the opportunities offered by the Internet.

In terms of electronic sales, major hotels and tourist units in Central Greece and the islands produce the highest rates, but generally a low level is recorded.

A rise was noted this year when compared with 2007 in search of information on accommodation, air and land transport and museums.

As for website preferences, users of the Internet for tourist purposes tend to browse those of the Greek National Tourism Organization, prefectures, municipalities, accommodation, transport and tourism offices.

Also noticed was an increase in the user demand for electronic services and particularly in the search for ticket reservations.

The study concluded that there is a need for a change in the mentality and attitude of entrepreneurs as although they perceive the need to adopt new technologies the statistics show otherwise.

Furthermore, there is a lack of knowledge in regards to the opportunities and benefits offered by the use of ICTs, which results in their use being limited to basic applications.

The observatory expressed the need to strengthen and coordinate efforts for the use of ICTs in tourism and for the implementation of awareness measures from the state.

The Observatory for the Greek Information Society operates under the supervision of the Ministry of Economy & Finance and the Ministry of Interior, Public Administration & Decentralization.

Greece Lags Behind in Tourism Development After the Olympics