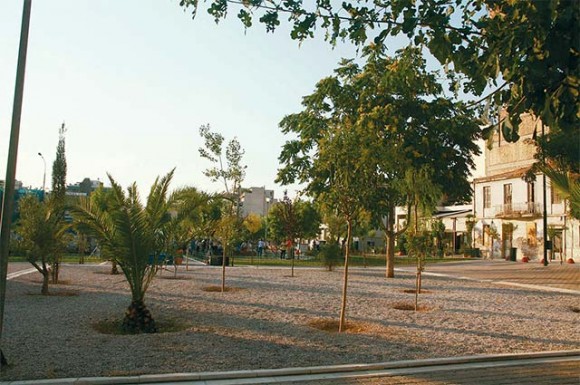 Avdi Square located at the junction of Leonidou, Myllerou and Keramikou Streets in the 3rd City District.

The City of Athens recently remodelled Avdi Square in Metaxourgio, increased the amount and quality of greenery, improved lighting and renewed tile surfaces.

Avdi Square forms part of the ‘We’re Taking Note and Taking Action’ program, which aims to rapidly and effectively solve everyday problems in all city neighbourhoods.

As part of plans to freshen up the face of Metaxourgio, the City of Athens intends to establish a new City of Athens Art Gallery (in the former silk factory that is being restored), a theater museum and a new, modern Friendship Club.

In addition, another green space and recreational area -the remodelled ‘ecological’ Paloubioti Square and its surrounds in Polygono- was opened to residents of the 7th City District by the City of Athens. The municipality expanded the amount of greenery in the square located at the junction of Paloubioti, Soka, Paparseni and Gobineau Streets with 53 trees and 1,200 bushes. New lighting and environmentally-friendly tile surfaces were also installed. The surrounding area’s revamp included the creation of walking paths and a pergola that offers views of Athens.

Avdi and Paloubioti Squares are the second and third recreational oases respectively, following the square in Votanikos, opened to citizens this summer.

Promotion of Thessalia Considered a Success