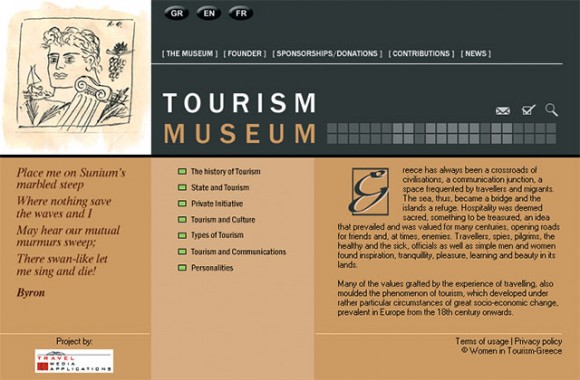 Tourism Development Minister Aris Spiliotopoulos announced a Greek Tourism Museum would soon be a reality at a recent gala held in honor of women in tourism. The new Tourism Museum -a long-term aim of the Greek Women in Tourism association- would be under the auspices of the tourism development ministry.

According to Mr. Spiliotopoulos, the creation of a Tourism Museum aims to “Enlighten the younger generation of its cultural heritage and the development of Greece’s evolutionary image as a tourist destination sending the message that where there is Greece, there is unexplored beauty.”

In 2001, a virtual tourism museum was created at www.tourismmuseum.gr following an official proposal made by Travel Media Applications to the Board of Directors of Greek Women in Tourism, and the foundations of a tourism museum were established.