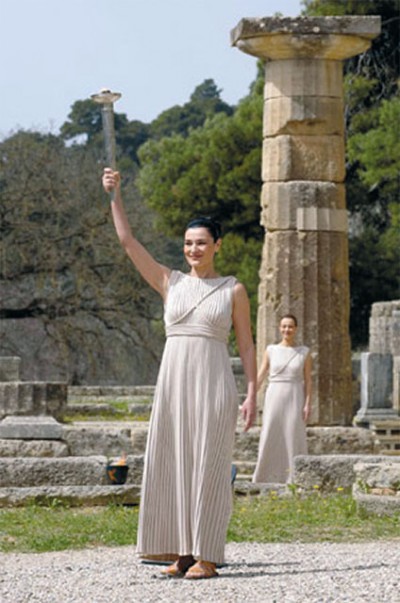 Greece handed the Olympic flame to China, the host of the 2008 Games, on March 30 at Panathinaiko Stadium in Athens. Beijing Games Organizing Chief and Beijing Communist Party Secretary Liu Qi received the flame and said: “In 130 days the 2008 Beijing Olympics begin and we and the other nations of the world look forward to this moment.”

The flame arrived in China on March 31 where the Olympic torch relay was launched under tight security. President Hu Jintao lit a cauldron on a red-carpeted rostrum on Beijing’s political heart Tiananmen Square and then handed the flame to Olympic champion high hurdler, Liu Xiang, who ran a symbolic first leg of the torch relay.

The 130-day relay, hailed by the organizers as the most ambitious ever, began in Almaty (Kazakhstan) and will cross 19 countries before returning to China for a three-month tour that includes an ascent of Mount Everest.

China’s newly appointed Vice President Xi Jingping used the ceremony to welcome the world to the Chinese capital and asserted, “The modern Olympic Games are a great event of peace and friendship for people around the world and the Chinese government and people warmly welcome athletes and friends from all countries and regions to come to Beijing for the grand Olympic event.”

Tourism Development Minister Aris Spiliotopoulos attended the ceremony and stressed the significance of the “heartfelt and very public thank you Greece received from the Beijing Olympic authorities that was broadcasted worldwide by hundreds of television stations and news agencies.”

The flame reached China despite attempts by pro-Tibet protesters to disrupt the ceremonies in Ancient Olympia and Athens. A small group of activists tried to stop the flame from reaching the Athens stadium where Beijing officials were waiting but Greek police restrained them.