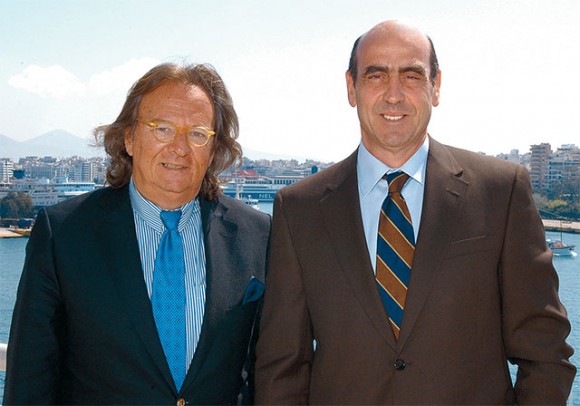 President of the Hellenic Professional Yacht Owners Association Antonis Steliatos with Minister of Mercantile Marine, the Aegean and Island Policy George Voulgarakis, during their recent meeting.

Mr. Voulgarakis and Mr. Steliatos agreed to the formation of a committee that would study the problems in the sector of tourism vessels and would make proposals for solutions and potential development.

According to the president of HPYOA, the primary concerns of professional yacht owners are the necessary upgrades in marina infrastructure, and the priority that tourism vessels should have in them. Mr. Steliatos also touched on the topic of bureaucracy in the field, primarily due to the co-jurisdiction of several public bodies.

A topic of great significance also discussed was that of professional yacht crew training and education that can be solved, according to Mr. Steliatos, “Only through the creation of an equivalent educational facility or through the establishment of courses in existing tourism schools.”

Mr. Voulgarakis accepted the invitation extended by HPYOA to inaugurate the 7th Nautical Tourism Symposium on Paros, to be held on 10-15 of May.

Mr. Spiliotopoulos said: “The members of HPYOA represent just less than two percent of the total tourism movement, that is, 234,000 annually from a total of 15 million visitors, however, these were the visitors with the highest income that left the highest financial revenue, thus aiding peripheral and national development.” He concluded, “This might be luxury tourism but this is the tourism Greece needs if sustainable development is to be achieved.”