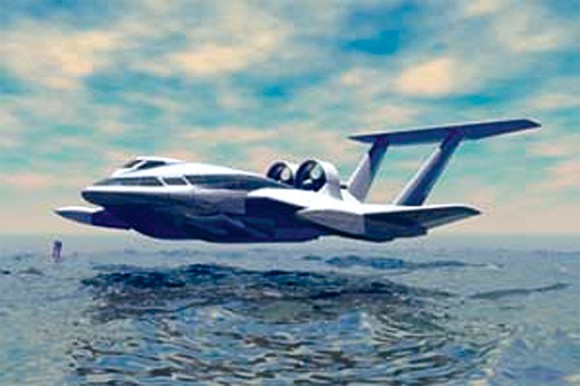 The route Heraklion to Piraeus, now some six hours by high-speed ferry, could be done in one hour and 36 minutes by the end of 2008 with the new hovercrafts that can reach 200 kilometers an hour and can ‘fly’ some 12 meters above the sea.

This anticipated revolution in aeronautical travel to the Greek islands is the aim of Flightboat Hellas, who would lease these ‘flying vessels’ and bring them to Greece by the end of 2008.
These advanced technology ships look like airplanes but their operation is based on the wing in ground effect (WIG). The wing in ground effect  is the official term adopted by the United Nations International Maritime Organization and the United Nations International Civil Aviation Organization for a marine craft using ground effect as a means of lift.

According to Flightboat Hellas (who represent these vessels in Greece), three of these vessels type “Hoverwing 80” are to be constructed in Hamburg by the company Hoverwing GMBH.

Representative of Flightboat Hellas Panagiotis Zaglis said: “We have  received financing for the first three Hoverwing 80 by a German shipping company and they will be chartered to a Greek company with a German flag and crew.” Technical support of the Hoverwing 80 would be provided by JOIN Ltd based in the nautical repair zone of Perama Port, and the company has also expressed interest in the construction of a second line of Hoverwing in Greece.

The Hoverwing 80 can carry up to 80 passengers, has an action radius of some 800 kilometers and is not affected by waves.

Half of Misleading Airline Websites Corrected