HATTA Elects A New Board of Directors

The Hellenic Association of Travel and Tourist Agencies (HATTA) recently held its annual general assembly and voted for its new board of directors. The general assembly was attended by a plethora of members from the travel sector, tourism industry dignitaries, travel agencies-HATTA members and tourism media. Secretary General of Tourism Spyros Efstathopoulos, President of the Hellenic Chamber of Hotels Gerassimos Fokas, and President of the Association of Greek Tourist Enterprises (SETE) Stavros Andreadis, all spoke at the general assembly.

Mr. Fokas asserted the importance of travel agencies as “The central channel for the distribution of hospitality,” and referred to the prospect of creating a “Tourism Chamber” so as to house all the members of the tourism sector. Mr. Andreadis, who called on stronger cooperation between the different members of the tourism industry, “So that we can collectively face future problems and challenges”, seconded this motion.

In line with the aforementioned, HATTA (as coordinating partner) presented the “Allways Tourism” project on “Competitiveness and Employment Promotion in the Tourist Agencies Sector, through the Employees and Entrepreneurs’ Adaptation to the new working requirements in the tourist field” within the framework of the general assembly.

In his speech “Quality and Technology: the tip of the dagger for travel agencies,” President of HATTA Yiannis Evangelou referred to significance of quality and technology for the competitiveness of travel agencies. He attributed the ever-increasing demands of the market to globalization, competition and the maturity of consumers that demand more specific services, and stressed the need for travel agencies to adapt and move in this direction. 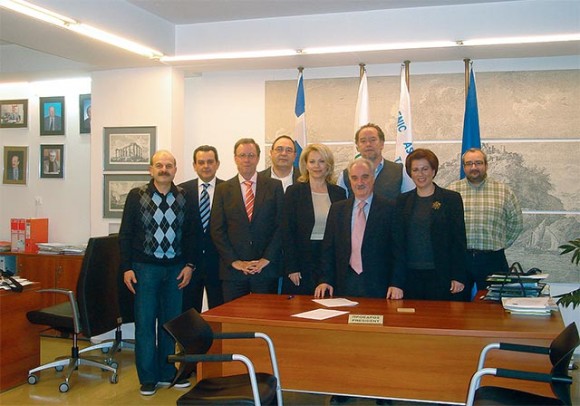 HATTA’s new Board of Directors during their first official meeting at the association’s offices.

Re-elected president, Yiannis Evangelou, expressed his satisfaction with the election process as the majority of the new board of directors (nine out of 15) are representatives of travel agencies from all over Greece, “Therefore ensuring HATTA’S strong and continuous presence in every corner of the country.”

A number of local travel trade professionals said they were suprised to see long-term member of HATTA’s board of directors, Spyros Ginis (Ginis Vacances), not be re-elected as a member of the board after more than a quarter of a century as an active member.

New Board of Directors for Blue Star Ferries