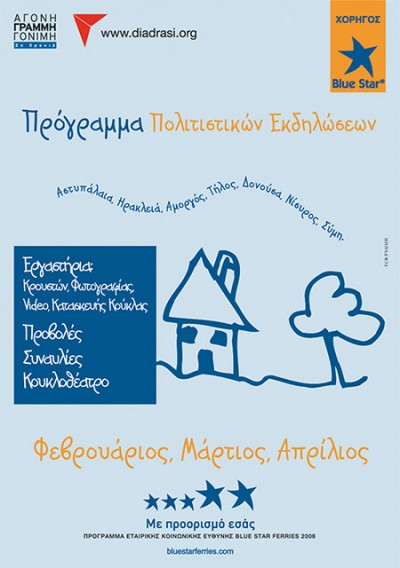 Blue Star Ferries targeted the local communities of the Aegean islands as part of its Corporate Social Responsibility  program by supporting the non-profit cultural organization “Diadrasi” in the program “Agoni Grammi Gonimi 2008.”

“Diadrasi” focuses on remote Aegean islands where it undertakes cultural education programs for students and for the local inhabitants of each region. The program includes workshops on digital arts (photography and video), doll making, percussion instruments, circus techniques, film projections, theater performances and concerts. According to the non-profit organization, its initiatives “strengthen the artistic expression of people that do not have access to such activities, while entertaining the inhabitants of these isolated regions during the difficult winter period.”

Blue Star Ferries representatives claim it is a priority to support the local communities with such initiatives as the company offers ferry services in the Aegean on a daily basis all-year-round. The company actively supports such initiatives as part of its Corporate Social Responsibility program “Destination-You.”