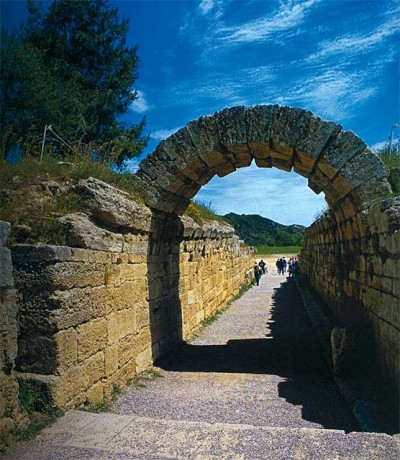 Tourism Development Minister Aris Spiliotopoulos recently signed a memorandum of cooperation with Mayor of Ancient Olympia Giorgos Aidonis and National Metsovian Polytechnic University Rector Konstantinos Moutzouris to launch a pan-Hellenic student competition for the design of a new entrance to the town of Ancient Olympia.

The memorandum anticipates a student competition for the “Aris Konstandinidis Award” -2008 having already been established as the year of the world-renowned architect by the tourism development ministry- whereby architecture students of the Metsovian Polytechnic University are called to submit their designs for a new entrance to the town of Ancient Olympia.

The best three student projects are to be submitted to Ancient Olympia town hall and the tourism development ministry has allocated financial rewards for first, second and third prize, at five thousand, four thousand and three thousand euros respectively and partial financial contribution by the University. The total cost of the project is estimated at fifty thousand euros and the town hall would exhibit the projects as well as decide on the potential construction.

The tourism development minister said: “We call on local authorities to follow this example and find ways to aesthetically improve their respective regions.” He added, “On its part the ministry aims to send a message to the whole of Greece that the image of each town, each municipality, each corner of our country, is of great significance in attracting tourism, and we must rally the younger generation in this direction.”

Mr. Spiliotopoulos also asserted, “Despite the financial reward the most significant reward for these groups of students is knowing their work would grace the entrance to one of the most historic towns in the world, and this is great progress for us as a nation so that next time we have an international competition, we won’t need to rely on the work of Mr. Calatrava.”