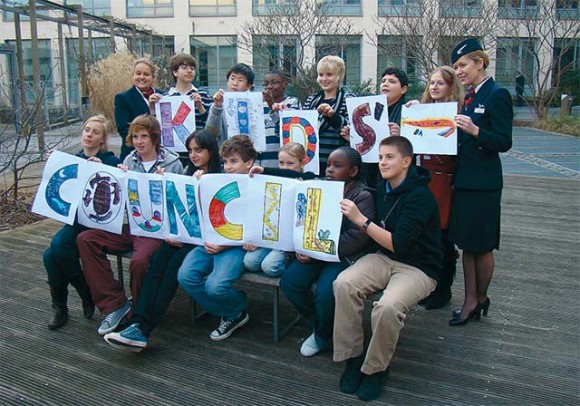 Gerasimos Kavalieratos (standing, third from right) with the other 12 children that make up British Airway’s Kids’ Council, outside the airline’s headquarters in Waterside, London. Representatives in the council also include children from Britain, Hong Kong, Uganda, Mexico, South Africa and Kenya.

Eleven-year-old Gerasimos Kavalieratos was the Greek representative amongst the 13 children from around the world who participated in British Airway’s second Kids’ Council at the airline’s headquarters in Waterside, London. The council, made up of children aged eight to 14, is a British Airways initiative aimed to improve the airline’s services to passengers in this age group.

During their visit the children advised on meals served during the flight, suggested means to reduce energy consumption and innovative techniques to recycle paper and plastic. Gerasimos suggested, “Less plastic in the meal set and messages of love and protection of the environment on the aircraft walls so they are prettier and make a statement.”

The children were also given a tour of the new Heathrow Terminal 5 and its “Kidzones” that offer young travelers facilities such as magnetic play walls and plasma screens for children’s programs and Playstation consoles.