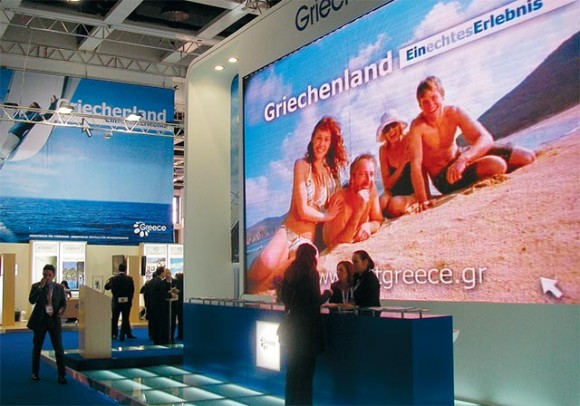 The award-winning GNTO stand received much admiration during the exhibition. It included a walk-through video projection tunnel showing Greek scenery and a mezze and wine- tasting corner.

Greece shined from beginning to end at the 42nd ITB Berlin travel trade show (5-9 March) last month. During the inauguration of the Greek National Tourism Organization (GNTO) stand, Tourism Development Minister Aris Spiliotopoulos announced Greece has gone up two positions (from 24th to 22nd) -amongst 130 countries- according to the Travel & Tourism Competitiveness Report 2008 revealed by the World Economic Forum.

Mr. Spiliotopoulos added that according to the Federation of Tour Operators, Greece holds the second position amongst eighty destinations worldwide insofar as interest of potential visitors is concerned. With regard to the German market specifically, research conducted by well-established tour operator TUI revealed a sample of some 3,500 German visitors who consider Greece to be one of the most attractive destinations worldwide.

With reference to the aforementioned, Aris Spiliotopoulos said: “Greece is making good progress but specialization is required if we are to achieve a new environmentally friendly tourism product.” He added, “The German market is significant because we receive some two-and-a-half million visitors annually and these exhibitions lend themselves to showing our best face so as to receive even more visitors in the years to come.” The tourism development minister referred to the four percent increase in German visitors in 2007 and asserted his belief that Greece can maintain this increasing trend. 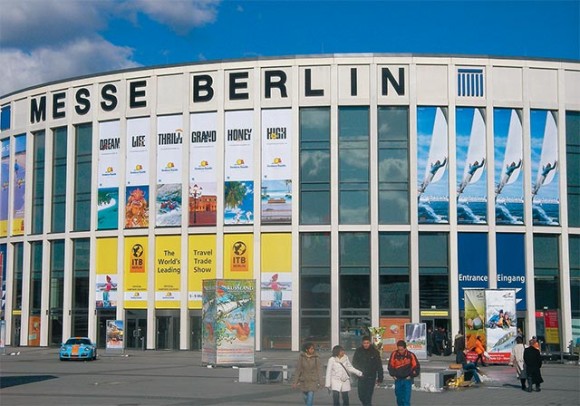 The south entrance of the exhibition center, adorned with massive posters of the new Greek advertising campaign and logo.

The GNTO received a distinction as it won the first prize with regard to aesthetic appeal and quality in service in the European category. Students of Cologne Business School conducted the evaluation of the stands. The evaluation and the prize giving ceremony were both under the auspices of the German Travel Association (DRV) and the Federal Association of the German Tourism Industry (BTW).

Greece also shone at events organized within the framework of the exhibition. A special ceremony was held to inaugurate an exhibition in honor of the new Acropolis Museum at Berlin’s Pergamonmuseum where four statues discovered during excavations under the new Athens museum have been lent to the museum for a temporary exhibit. Minister for Culture Michael Liapis spoke at the ceremony, as did the tourism development minister, who said: “Our country must travel everywhere, and we must aim in this effort to promote a new face of Greece, a face that is constantly changing.” The SONY Center at Postdamer Platz hosted a photographic exhibition (from a GNTO collection), within the framework of ITB, displaying an array of images from Greece.