The Hellenic Association of Professional Congress Organizers (HAPCO) recently held its fourth annual two-day conference on “The Environment, Synergy and Crisis Management in Conference Tourism” at the Megaron Athens International Conference Centre, where much emphasis was placed on the launch of the new Athens Convention and Visitors Bureau (ACVB) next month.

President of HAPCO Dimitris Manztios opened the conference and touched on the major issues that needed to be addressed by the guest speakers and during the conference workshops. He asserted, “Despite an annual increase in conference tourism of some five percent, Greece still faces major obstacles in its identification as an ideal conference destination.” He questioned the progress of the transformation of the Faliron Complex into a suitable large scale conference facility and stressed, “In lieu of the much anticipated launch of Athens’ CVB, we must all -state, municipalities and peripheral organizations- contribute to the effort of making it a successful tool for the marketing, promotion and organization of Greece as a conference destination.”

Pasok MP Panagiotis Sgouridis welcomed the delegates and asserted the significance of crisis management as part of the aforementioned with reference to the fires in Peloponissos last summer as a prime example of how a more effective system needs to be in place. Member of HAPCO board of directors Zacharias Kaplanidis also extended a welcome and stressed, “Greece’s comparative advantage is not enough otherwise we would be satisfied with our current performance.” He added, “With regards to conference tourism, specific actions need to be taken, such as those taken in Vienna (that claims 2.5 percent of conference tourism) and Barcelona, which are successful conference destinations because they have developed special techniques to attract this type of tourism.” 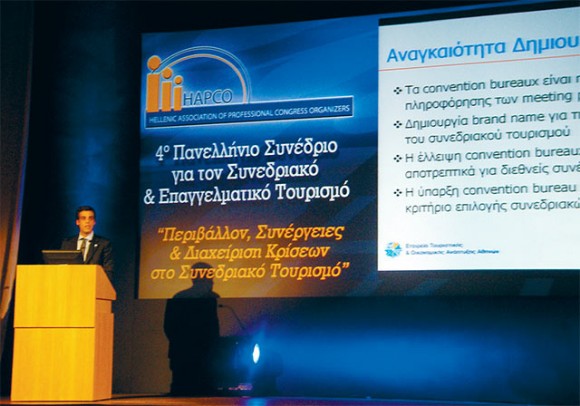 Managing Director of Athens Tourism & Economic Development Company, Panagiotis Arkoumaneas, spoke at the conference on behalf of Athens Mayor Nikitas Kaklamanis. He outlined the structure and purpose of the new Athens Convention Bureau.

Managing director of the Athens Tourism & Economic Development Company (ATEDCO), Panagiotis Arkoumaneas, was a guest speaker at the conference on behalf of Athens Mayor Nikitas Kaklamanis. He outlined the structure and purpose of the Athens Convention Bureau and stressed the official launch would be at the IMEX exhibition in Frankfurt on the 22-24 of April.

Mr. Arkoumaneas said: “According to International Congress & Convention Association (ICCA) results, conference tourism accounts for nine billion dollars revenue annually.” He added, “Athens currently holds the 20th place in the number of international conferences and according to a separate research conducted by HAPCO, 67 percent agreed the creation of a convention bureau was essential for any significant conference destination.”

With reference to the aforementioned the managing director of ATEDCO explained, “The ACVB would be under the administration of ATEDCO and its aim would be the promotion of Athens as a conference destination, the attraction of international conferences, the creation of a conference culture and the service of meeting planner requests.”

Mr. Arkoumaneas added, “The ACVB aims to aid conference planners, and attract conferences through letters of support, as well as promote the potential of Athens as a conference destination through newsletters, magazines, the Athens Meeting Guide and familiarization and foreign press trips.” He concluded that the role of the ACVB is “Only advisory and an aid for the organization of conferences not a conference organizer in itself.” Financial support is anticipated through partnerships for sponsorship that would then be referred to as “preferred suppliers.”

Dimitris Koutoulas, tourism development and marketing advisor and Professor at the Greek Open University, and representative of the tourism development ministry, Maria Dousa, presented the university thesis of the latter as a guide to the path the new ACVB must follow.

Mr. Koutoulas explained, “Through specific efforts, such as the success of the Thessaloniki Convention and Visitor’s Bureau that has seen an increase in international conferences annually, we have improved our presence in the international conference market with a 1.9 percent share.” He continued, “In order for this to be cemented and more unified, professional and guided efforts must be undertaken.” Ms. Dousa presented her thesis that used a sample of 60 CVB’s worldwide (34 national, five peripheral, 21 local) all created before the year 2000. 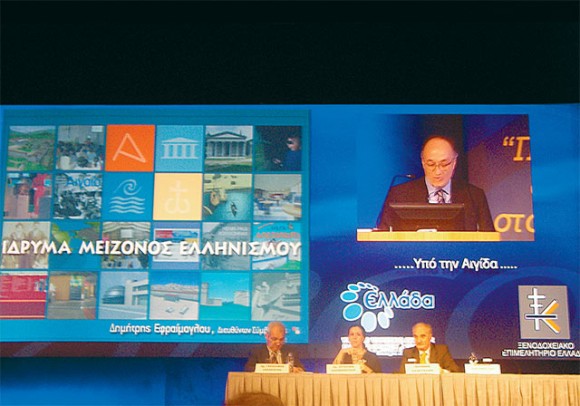 Managing director of the Foundation of the Hellenic World, Dimitris Efraimoglou (screen) revealed the launch of the center’s new facility, a conference center behind the “Tholos” theater with a capacity for some 1200 delegates. Below: Professor of tourism, economics and management at the Univ. of Patra, Dr. Gerasimos Zacharatos with Managing Director of Logos Associates, Aggeliki Kosmopoulou and President of HATTA, Yiannis Evangelou, who formed the panel for the opening session of the conference.

Her research indicated the most significant proposals for the ACVB, those being a work force of at least 25 specialized employees, 2.7 to three million euros annual funding (particularly through the formation of partnerships), familiarization trips for decision makers and press trips, and discount passes for conference delegates as offered in Berlin and Paris. She also asserted, “As in all the sample CVB’s, results will not be seen instantaneously but rather as an outcome of a long-term and well-guided effort.”

Guest speakers also included Steen Jakobsen, convention director of “Wonderful Copenhagen,” who introduced “Efficient CVB management: The Copenhagen experience.” The Copenhagen Convention and Visitors Bureau with its network of 300 members -and itself a member of the Best Cities Global Alliance- functions on the notion it must “Pool resources but keep interests separate so as to keep stakeholders happy.” Its members pay an annual fee according to their category and each section is responsible for its own budget from a total budget of 18 million euros annually. Mr. Jakobsen asserted the success of the city’s CVB is “The strong partnership between the private and public sector and the understanding that success is a long-term process.”

Former tourism development minister and current health and social solidarity minister, Dimitris Avramopoulos, and Mayor of Athens Nikitas Kaklamanis as well as the president of the Thessaloniki Convention and Visitors Bureau, Vasilis Brova, were honored at the gala for their overall significant effort in the upgrade and promotion of Greek conference tourism.