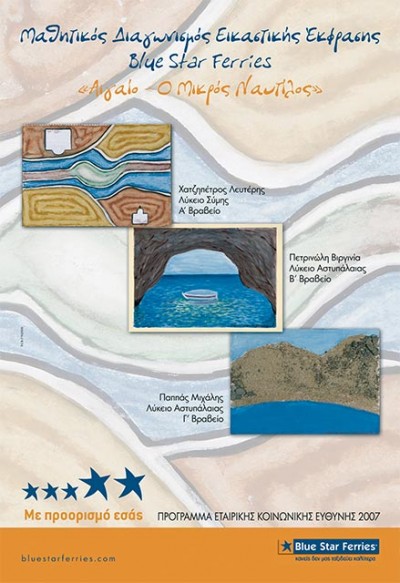 The winners of the first (Symi), second and third prize (Astypalea) from top to bottom respectively in the visual arts section of the competition launched by Blue Star Ferries entitled “Aegean – O Mikros Naftilos.”.

Blue Star Ferries’ corporate social responsibility program for 2007-2008 focused once again on the youth of the islands served by company vessels and inspired by the Aegean Sea. In early 2007, Blue Star Ferries announced a School Competition divided in two sections—one of creative writing and the other of visual arts— entitled “Aegean – O Mikros Naftilos” and based on the work of world-renowned poet Odysseus Elytis.

The competition targeted students from high schools in the Cyclades and the Dodekanissos islands and was aimed at giving young people the chance to express themselves and show their creativity in a theme that was familiar to them.

The competition ended recently with winners in the writing section from the islands of Paros, Rodos, Patmos, and Symi and Astypalea in the visual arts section.

The best poems and paintings received a monetary award from the company and a book of the works of Odysseus Elytis. The students received their awards and commendations from the executives of Blue Star Ferries. The students’ work will be published in the company’s magazine “On Blue” and the awarded paintings will be exhibited on the company’s vessels. The Ministry of the Aegean & Island Policy and the Ministry of National Education and Religious Affairs are firm supporters of the Blue Star’s efforts.

As well, Blue Star Ferries corporate social responsibility program recently showed its sensitivity to the education and support of young students in the maritime sector and donated laboratory equipment to the 1st technical vocational education school of Kalymnos.

The school has hosted a maritime sector for three years that specializes in the education of deck & engine officers. It is the only school in the Dodekanissos with this specialization and it serves students from the wider region in an area with a tradition in shipping. The executives of Blue Star Ferries visited the island of Kalymnos, met the students and the teachers of the school and delivered the equipment.

The Grass Really is Greener on Celebrity Solstice