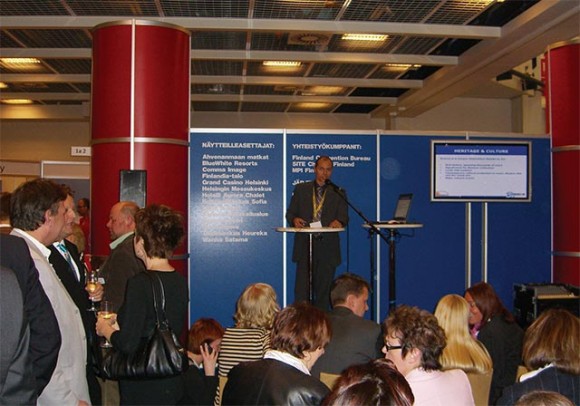 Marketing and communications executive for HAPCO, Yiannis Kyparissopoulos, presents the potential of Greece as a conference destination at MATKA 2008.

The Hellenic Association of Professional Congress Organizers recently did a presentation entitled “Meetings, Conferences and Incentives in Greece” at the Nordic travel fair MATKA 2008 held in Helsinki Fair Center (Finland) on 17 to 20 January. HAPCO was officially invited by the Greek National Tourism Organization office for Scandinavian countries in Stockholm, Sweden.

The presentation was undertaken by marketing and communications executive for HAPCO, Yiannis Kyparissopoulos, at the “Meeting Industry and Group Travel” section of the fair. It was attended by some 50 professionals in the field of conference tourism as well as visitors to the exhibition who received invitations from the GNTO office in Stockholm.

Mr. Kyparissopoulos presented the comparative advantages of Greece as a conference destination and placed emphasis on conference and hotel infrastructure in key Greek destinations as well as the tourism products they provide in conjunction.

HAPCO and its members were also promoted through company leaflets and the association’s CD-ROM that was distributed to visitors at the GNTO stand at the fair. Meetings also took place between HAPCO and representatives of bodies active in conference and business tourism.