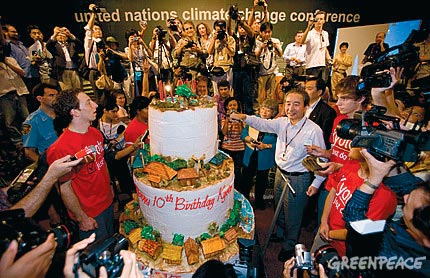 Politicians from all over the world, including Greece, met in Bali, Indonesia, between December 3 and 14 for the United Nations Climate Change Conference. At the conference, secretary general of the World Tourism Organization, Francesco Frangialli, committed the tourism sector to the common cause of climate change response, and linked it closely with the fight against poverty.

Mr. Frangialli said: “We are all part of the greater global economic pattern of tourism and whether we come here to enjoy the beaches or the conference halls -or both- we are contributing to local commerce, to jobs, to investment, and to export income.”

The secretary general added, “In doing so we are providing sustainable livelihoods through a long supply chain, which we must increasingly help to make carbon clean, and we must start now.”

Mr. Frangialli gave three clear messages to the summit. He asserted that tourism -business or leisure- and all of its accommodation, transport and service activity is significantly affected by climate change as well as being a contributor to global warming.

He explained, “Destinations around the world are under pressure; From ski resorts to beach resorts, from city breaks to island retreats, tourism will not shrink away from its responsibilities to respond through adaptation and mitigation, as well as by technology and financing for poor countries.” He asserted, “We are part of the problem and part of the solution.”

Mr. Frangialli continued that tourism is a major factor in the war on poverty since for most developing countries it is the largest single export and major driver of jobs, investment and economic transformation. He added, “In general, these poor countries are most vulnerable to climate change and at the same time are the ones who create the least green house gas emissions, therefore tourism must be allowed to grow responsibly in these states, and actions to curb emissions must take this into account.”

The secretary general added, “The United Nations World Tourism Organization will act as a conduit for the tourism sector into the UN system response to climate change contained in Secretary General Ban Ki-moon’s Bali roadmap.”

UNWTO undertook two side events at the summit in collaboration with the Ministry of Tourism and Culture of the Republic of Indonesia to underscore the interrelated impacts of climate change and tourism. It presented the results of a scientific analysis that showed tourism is estimated to contribute some five percent of carbon emissions approximating its global contribution but far below its contribution to the economies of developing countries.

As the most important meeting on climate change in recent years opened in Bali, Greenpeace unveiled a giant thermometer outside the conference, warning delegates to avoid rising global temperatures from reaching dangerous levels. The 6.7-meter-high thermometer’s message, “Don’t cook the climate!”  was there for the whole duration of the conference.

Greenpeace urged governments at the conference to set a two-year deadline to agree on an action plan for the survival of the planet. This, according to the organization, must be an action plan that drastically cuts emissions from fossil fuels and ends deforestation, a massive contributor to CO2 emissions.

The developed countries, Greenpeace asserted, are responsible for over 80 percent of all the man-made emissions currently in the atmosphere and must find ways to help the developing world to deal with the impacts of climate change and to obtain clean technology.