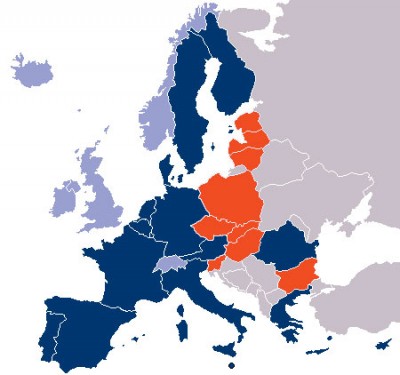 Nine new countries (red) are added to the existing 15 (blue) and expand the Schengen area.

On 21 December 2007, nine countries were inducted into the Schengen area thus facilitating travel within Europe and eradicating land and sea border control restrictions.

The addition of Estonia, the Czech Republic, Lithuania, Hungary, Latvia, Malta, Poland, Slovakia and Slovenia to the existing 15 member states amounts to 24 members of the Schengen area in total. The eastern borders of the Schengen area are 4,278 kilometers in length. With the expansion of the Schengen borders, all citizens of member-countries can travel with ease through these respective countries without long queues at border controls. Border controls were abolished at the internal land and sea borders for these nine states and air surveillance is anticipated to be abolished by 30 March 2008.

President of the European Commission, Jose Manuel Barroso, said: “The number of Schengen countries has increased to 24 and the number of citizens enjoying the freedom to travel without obstacles to 399 million.” He added, “People will be able to drive uninterrupted from Portugal to Poland and Greece to Finland and this will bring great practical benefits and allow visitors to enjoy our diverse cultures and hospitalities.”

Entry to U.S.A Without Visa for Greek Nationals