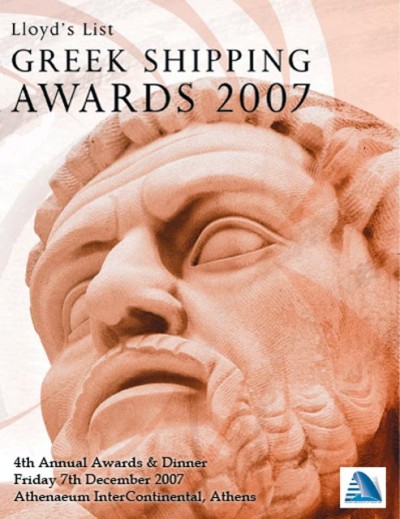 Lloyd’s List Greek Shipping Awards was a big success as it recognized the best in Greek shipping. DryShips boss, George Economou, and Greek ship owner and industry legend, John Carras, all took major prizes. Mr. Carras was named “Personality of the Year for 2007,” an award accepted on his behalf by his granddaughter, Tatiana Petalas.

In its fourth year, the Lloyd’s List Greek Shipping Awards has established itself as the shipping industry’s premier national awards event. The event was held in December 2007 at the Athenaeum InterContinental in Athens and was attended by Minister of Mercantile Marine and Island Policy Georgios Voulgarakis.

Listed bulker owner Diana Shipping won the “Dry Cargo Company of the Year Award” while George Economou, chairman and chief executive of DryShips, won the title “Newsmaker of the Year for 2007,” the only award decided directly by Lloyd’s List journalists.

Pericles Panagopoulos, chairman of the board of directors of the Attica Group, received the award for “Lifetime Achievement,” one that reflects a career of more than 50 years that has included the establishment of two innovative passenger shipping companies, Royal Cruise Line in the 1970s and 1980s, followed by ferry group Attica since the 1990s.

Headed by Constantinos Angelopoulos, Arcadia Shipmanagement won “Tanker Company of the Year for 2007” after it recently completed one of the world’s largest tanker delivery programs, with all vessels under Greek flag.

Tsavliris Salvage Group won the award for “Achievement in Safety or Environmental Protection,” with the panel commending the company’s work in the Golden Sky and New Flame salvage cases. Posidonia Exhibitions won the “2007 Piraeus International Centre Award” while the Hellenic Centre for Marine Research took the “Technical Innovation” prize for its ongoing work on the Poseidon system.