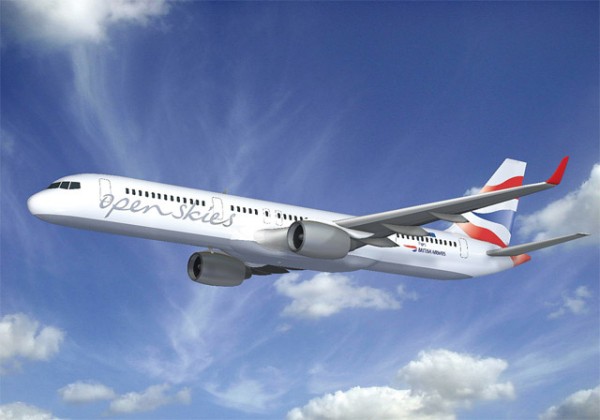 British Airways recently announced its plans to launch a subsidiary inter-continental airline, “OpenSkies,” that would conduct daily flights from New York to Brussels and Paris.

The airline is anticipated to launch in June with one Boeing 757 aircraft that will operate from New York to either Brussels or Paris Charles de Gaulle airports. A second aircraft will be added to the fleet later this year to fly to the other destination. The aim, according to the airline, is to operate six 757’s by the end of 2009, all of which will be sourced from the current British Airways fleet. The Business Class cabin has 24 seats that convert into six-foot long flat beds. There will be 28 premium economy seats with a 52-inch seat pitch and 30 economy seats.

The airline is largely targeted towards business and affluent leisure travelers. Dale Moss, the new venture’s managing director and former British Airways’ director of worldwide sales claims, “We do not intend to be a mass-market type of vehicle.”

The 757’s will have winglets retro-fitted on the aircraft so as to improve fuel efficiency, reduce the aircraft’s carbon emissions and increase its operating range.

British Airways Chief Executive Willie Walsh said: “This is an exciting new venture for us and we are confident that it will be a great success as we build on the strength of the British Airways brand in Europe and the United States.”

According to British Airways, the new carrier is “a way of celebrating the first major step toward a more open U.S.-European aviation market.” It is also a response to increased competition that British Airways would face at London Heathrow and other European markets once the agreement takes effect in March 2008.