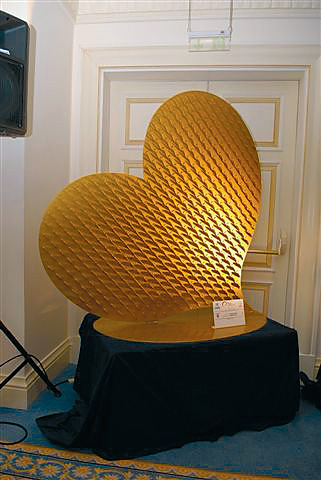 The metal heart designed by the sculptress Aphroditi Litti.

“Loud heartbeats will be heard throughout the city of Athens in the new year with the opening of the public art event Hearts in Athens in 2008,” Cultural Organization for the Municipality of Athens Chairwoman Sophie Daskalaki announced at a press conference held recently.

The new public art event will grace the city of Athens in January 2008, and its aim will be to familiarize the citizens with distinctive works of art, in the form of hearts, that will fill the streets, squares, parks and the underground stations of Athens with color.

The event’s objectives and targets were developed in the press conference by the representatives of Hearts in Athens ’08, the curator of the Exhibition Iris Kritikou, representatives of the grand sponsors of the event and the chairman of the charity union “Mazi gia to Paidi,” Ioannis Papadatos.

During the press conference the first two sculptures that were designed for Hearts in Athens ’08 were presented. A metal one was designed by the sculptress Aphroditi Litti, who also drew the design of the heart on which the sculptures are based upon, and the other one, in a live performance, by the painter Eva Koliopantou. The sculpture bases are available in two different types: One is three dimensional in fibreglass and one is metallic.
The event has been placed under the auspices of the 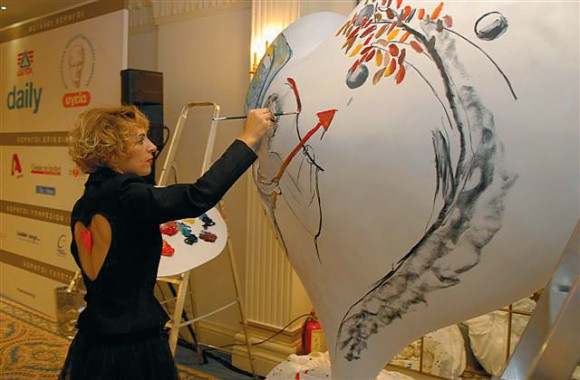 The painter Eva Koliopantou during her live performance.

Hearts in Athens ’08 exhibits will remain in the city from January 21 until March 19, 2008. On April 14, the Hearts will be auctioned with a big farewell party where 50 percent of the auction’s proceeds go to the Charity Union “Mazi gia to Paidi.” The organizers also anticipate the success of the event will allow for additional such public art exhibitions in the future in other large cities in Greece, such as Thessaloniki and Larissa.