The Attica Hotel Association recently held its 38th annual assembly where its members revealed and discussed statistics for 2007. The assembly was opened by the president of the association, George Tsakiris, who began by referring to 2006 as “an overall successful year for the hotel industry.”

The president explained: “Hotels in Athens still have a lack of satisfactory infrastructure, provide low quality services and poor urban surroundings, and depend upon a non-existent tourism organization and ineffective promotion.” 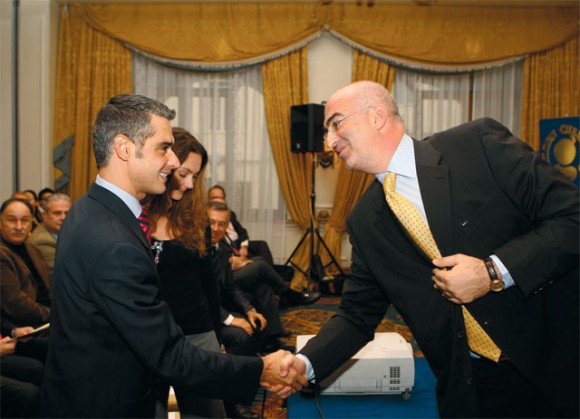 Tourism Development Minister Aris Spiliotopoulos is greeted by the president of the association, George Tsakiris.

Mr. Tsakiris then outlined key points of concern discussed by members during the closed meeting earlier that day. The first issue addressed was the lack of an adequate conference center in Athens and that, three years after the Olympic games, “The process for the transformation of the Faliro Stadium into a conference center still hasn’t materialized.” He noted the absurdity of the fact that the Faliro Pavilion took only 16 months to be built, and stressed that Athens “must earn the trademark of a conference destination.”

The final issue that the president addressed was the absence of a destination management organization in Greece, which is already in place in other competitive cities. With reference to this he claimed, “They say that there are not enough very good hotels, very good restaurants, enough exhibitions, and a lot of anything, but we must promote effectively to convince the world of the opposite, and show them what we do have enough of.”

A presentation was then made on research conducted by GBR Consulting, business consultants specialized in strategy, marketing, organization and finance in various industries such as tourism, on behalf of the Attica Hotel Association. The results came from a customer satisfaction survey conducted with a sample of 1,500 tourists staying in three-to five-star hotels. This particular survey is the third of its kind conducted on behalf of the association in its efforts to collect valuable statistics for sustainable tourism development in the Attica region.

The survey illuminated key aspects concerning distinctions between leisure and business tourists. Some 90 percent of those asked if they would recommend Athens to a friend said “Yes.”

The general consensus indicates business tourists were less satisfied than leisure tourists. The opinion was expressed that “The creation of an adequate conference center at the Faliro Pavilion could affect this opinion.” Business tourists were also less satisfied with their overall stay and referred to “the poor attitude of Athenians, lack of information, pollution, lack of sidewalks and parks” amongst the most prominent deterrents for a revisit. In these categories, business travelers were more critical than leisure travelers.

The survey characteristically points out that “despite an increase of 12.5 percent between 2004 and 2006, the total increase amounts to 600,000 overnights, which is poor in relation to top ten European destinations, amongst them Amsterdam, Paris and London, where the figures are above this number and reach 7,300,000 in some cities. Overall, the survey concludes that although there are encouraging statistics and we should have optimism in the future of Athens as a city break destination, realism is required as there are still many areas in desperate need of improvement and restructuring so that coordinated efforts can bear fruit.

Tourism Development Minister Aris Spiliotopoulos spoke at the general assembly and commented on the statistics presented. He explained that Athens has a comparative advantage over other European destinations, that being the Mediterranean climate, and expressed his conviction that “Athens can become one of the most competitive city break destinations worldwide.”

With reference to increasing overnight stays, he commented that this is optimistic, but we should still be reserved. He discussed the issue of Athens as an expensive destination and commented that “Price does not render Athens unapproachable to tourists compared with other city break destinations such as Paris that is 105 percent more expensive and Turkey which is 49 percent more expensive.” This, he concluded, “in accordance with hotel prices that remain low, is encouraging for Athens.”

Athens Mayor Nikitas Kaklamanis, who also took the stand, spoke about the new and updated City of Athens portal that has been revamped according to the London prototype and even includes a section specifically for children.

He asked hoteliers to place their waste in the provided bins at the scheduled times so as to set a good example and avoid culmination of waste on the sidewalks and entrances.

The mayor also asserted that the organization for the promotion of Athens has now been transformed into a private company thus allowing it to be more competitive and promote conference tourism more effectively.