The Society of Incentive and Travel Executives recently organized a seminar-gathering for its members, where the guest speaker was Alexandros Kouris, PRC group director designate and head of communications business unit. The PRC group is the consultancy that was commissioned with the branding of Greek tourism. It specializes in research-based consulting, business development and predictive analysis.

The president of the Site Greek chapter, Tassos Pappas, who outlined the aims of the seminar and the society’s objectives, opened the event. Greek professionals of incentives who were members of Site created a Greek chapter in Greece in February 2006. The chapter was officially approved by Site International and inaugurated in October 2006.

Mr. Pappas reasserted the objectives of the chapter, which include “the creation of a national and international image for the professionalism of Greek members, the promotion of the image and quality of services of members -both locally to the corporate incentive users and abroad to the incentive users and incentive houses- and to increase membership professionalism and efficiency with continuous education.”

The president of the society then introduced the guest speaker, Mr. Kouris. He began by explaining that he is part of a 42-member team responsible for the research into the branding of the Greek tourism product and that this aim dates back to five or six years of discussion with the Greek National Tourism Organization and affiliated ministries. He explained the need for this arises from the fact that “Greece is missing a professional approach to tourism.”

The PRC group director spoke about the steps and reasoning behind the project. He said the first thing we, members of the tourism sector, have to ask ourselves is “Where are we? Where can we go? How can we get there?” With this in mind, Greece bought, for the first time ever, statistics from the European Travel Monitor, a continuous survey measuring the outbound travel demand and travel behavior of the Europeans and the world. Many tourist destinations use these statistics to modify their tourism product accordingly.

Mr Kouris explained that the statistics were “not surprising, as in terms of its sea and sun product, Greece has nine percent of the world share.” Greece, however, does have to compete with Turkey that has 10 percent, Spain that has 28 percent and Italy that comes close with eight percent.

Statistics show that sea and sun make up the largest percentage of Greece’s share in the world tourism market and Greece scores low in other types of tourism such as countryside tourism and cultural tourism.

Greece does score high with regards to nautical tourism however with 26 percent of the world share, but Croatia is close behind with 20 percent in this market. Mr. Kouris used Croatia as an example of a “success story” in the tourism world due to its rapid tourism growth in only a few years. “Nautical tourism is a very lucrative type of tourism and Greece has the ability and potential to successfully market it.”

He later explained that marketing and branding of Greece is not advertising. The brand of Greece, he said, “is not Wonderful Greece, since this is a logo.” He asked the members of Site to close their eyes and think of Greece. “The image that comes to mind is not incidental, it must be planned,” he added “Perception is reality therefore people know a country by hearing, reading, asking about it.” Thus, he concluded, “branding is to control perception.” 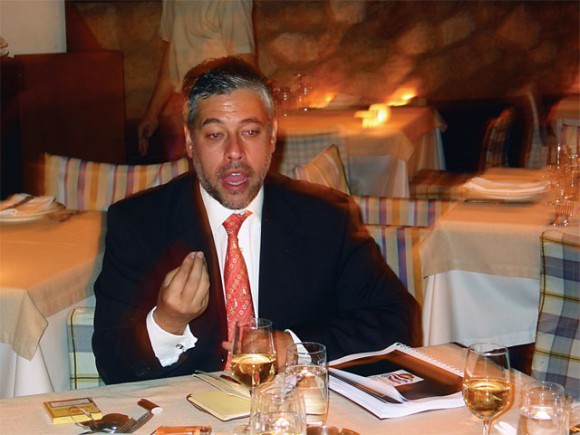 Alexandros Kouris explains the concept behind “branding” to Site members.

Mr. Kouris asserted that everyone in the world knows Greece in some form or another therefore Greece is not a new player, just one that has the archetype of a “summer destination with antiquities.” He added, “Although this is not a bad thing, it does restrict the type of incoming tourism.”

Greece must retain the old model but adapt its tourism product so as to convince the visitor that Greece offers choice. Greece must offer a promise to its future visitors and this predisposes what type of visitors Greece wants to bring, and this is the underlying notion of the strategy, that “not all visitors are the same.” Mr. Kouris explained that not all tourists are mass tourists and if we visualize tourism as a pyramid, “our aim is to attract that top 10 percent.” The reason for this, he asserted, is because “Greece does not have a problem in bringing in quantity, but quality tourism.”

He outlined the 10 percent of total tourists as not being tourists, but “seasoned travelers” who “modify and influence opinion.” It is these tourists who travel in quest of experiences and come back to tell, blog, promote their travels. This type of tourist has the power to influence the rest. “They are, in general, more affluent, and have the capability to travel extensively and discover new destinations,” he concluded.

With this in mind, Mr. Kouris explained that Greece’s new promise to these tourists should be “a destination of large and nonparallel experiences,” and used the analogy of a child in a theme park to simplify the objective.  Greece has to change its identity and make the experiences it can offer a product. He added that in doing this research, he traveled all over Greece and spoke to hundreds of people. After this, he claims, he is convinced “the foundations are there to develop these experiences, now we must use incentives to exploit them.”

Although new Tourism Development Minister Aris Spiliotopoulos has begun being briefed on this topic, Mr. Kouris did assert, “it is not the sole responsibility of the GNTO and affiliated ministries, it is also imperative that the different tourism bodies are proactive in this approach.”

Finally, when questioned about the negatives in Greek tourism, notably rubbish in the streets and rudeness towards tourists, Mr. Kouris explained that they have been noted in the research but instead of taking a step back because of this, we must assess our situation, say to ourselves that “this is the reality, how can we make it better?” He used the London and rain analogy to assert his point.

Finally, when asked what percentage of these initiatives he believes are actually feasible, he explained that “a consultant’s job is to proactively advise; the executing power remains in your (travel sector) hands.”

He concluded that one indication of moving forward is Greece’s new advertising campaign that places more emphasis on thematic tourism, that is, wine routes, exploration of caves and volcanoes.

The London Event” a Greek Success