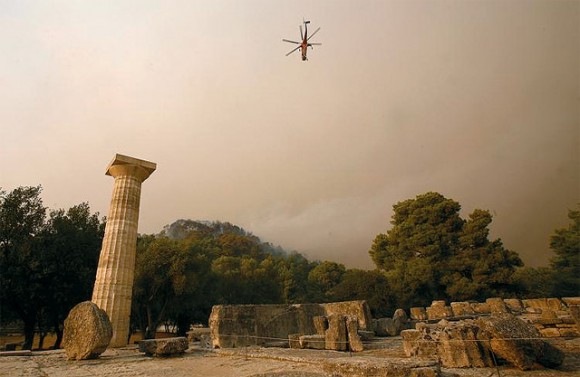 Ancient Olympia’s archeological site was in danger from the uncontrolled fire.

The recent fires in Greece have destroyed over 1,900,000 hectares of land, claimed over 60 lives and destroyed dozens of villages. The loss of value of a number of tourism-related companies stocks on the days of the fires show how, according to the international press, the fires can directly affect tourism in Greece. Presently, according to economists, it is difficult to calculate of the long term effects of the fires on the tourism sector, which is one of the most important sources for Greece’s GDP.

However, tourism statistics indicate a rebound in 2007 with a record 17 million visitors.

In response to this the Association of Greek Tourist Enterprises has called for a “need to protect tourism from misinformation.” The association recently expressed its anger for the tragic consequences of the fires and its condolences to the families of the victims.

Also, it asserted that the Greek government is fully responsible for a more specific and correct portrayal to the international press of the current situation of tourism in Greece, which, according to the association, is “calm, strong and far detached from the problems that have affected specific regions of the country as a result of the fires.”

The association holds a similar position in so far as the requirements of tourist industries affected by the fires is concerned, and calls for the government to support and compensate them accordingly, now and in the foreseeable future. In addition it has asked tourist industries to retain their quality services so as to “send the message that Greece’s tourism remains strong.” 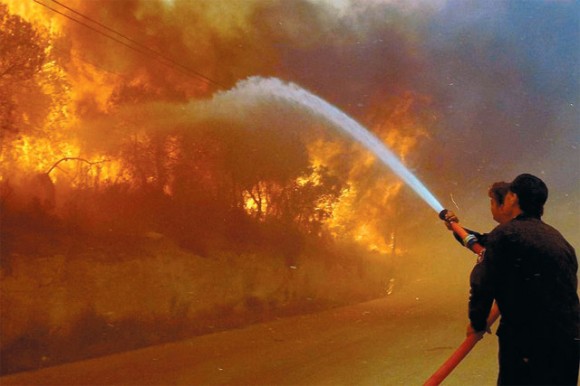 Firemen as trying to put the fire under control.

Yiannis Evangelou, president of the Hellenic Association of Travel and Tourism Agencies, also asserted that there are no cancellations from major tour operators in the areas where the fires broke out. He said that scheduled arrivals “ran normally and tourist arrivals via charter also ran normally in the airport of Adravida in northwestern Peloponissos, and specifically in the Ilia prefecture, there was no problem with reservations in Ancient Olympia.”

Agni Christidou, general director of the Hellenic Chamber of Hotels stressed that no damages have been reported in hotel infrastructure and hoteliers operate normally. She added that there are “no cancellations from tour operators in reservations made abroad.”

President of the Laconia Hotel Association, Dimitris Pollalis, refuted these claims and said that although no damage has been caused by the fires to the hotels themselves, several hoteliers are “on the verge of bankruptcy.”

Mr. Pollalis claimed that occupancy in the prefecture of Laconia had seen unprecedented figures until recently, and that the advent of the fires has resulted in the dramatic reduction of these figures. He added that the tourism product of Laconia is identified with the natural surroundings and it will take years before the damage can be restored. Finally, he claimed that contrary to statistics, the prefecture of Laconia did see mass cancellations in bookings and early departure of existing visitors.

Financial assistance has been promised by the government to areas devastated by the fires.