Qatar Airways was recently honored at the annual world airline awards ceremony. The airline received three awards, amongst them the prestigious award for best first class worldwide. The Doha-based carrier won, second-year running, the award for best airline in the Middle East and the cabin crew was awarded as the best in the region for the fifth year in a row.

An annual international survey conducted by Skytrax indicated that 15 million passengers from over 90 different nationalities chose Qatar Airways as one of the five best airlines worldwide. This comes soon after Qatar Airways was awarded the five- star Skytrax classification earlier this year for outstanding results and high quality services. 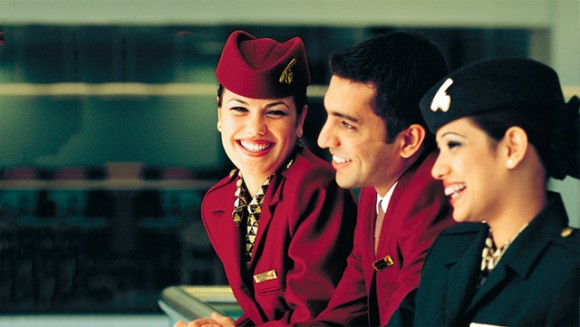 Qatar Airways staff show why they deserve the award for high quality service.

Akbar Al Baker, CEO of Qatar Airways said: “We have achieved a lot in the past ten years and these awards are evidence that Qatar can safely claim to be one on the ten best airlines worldwide. Our customers dedicated their time in order to vote for us and we thank them for this. Qatar Airways always tries to improve its services and we are confident that we will receive the award for best airline worldwide in due course.”

Chief executive of Skytrax, Edward Plaisted, commented that the study done in 2007 for the awards was the longest in duration and had a more international scope than any previous research conducted by the organization. Skytrax is the world’s leading air transport research organization that specializes in global airline surveys.