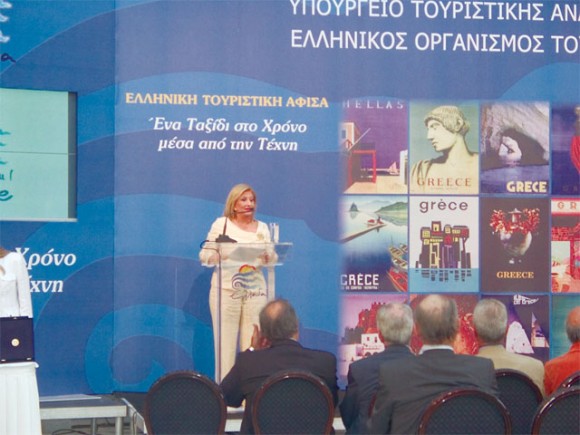 Tourism Development Minster Fanni-Palli Petralia recently opened the exhibition of Greek tourism posters at a ceremony held to commemorate artists that designed posters throughout the century and award artists that participated in this year’s competition.

The exhibition at Zappio, under the auspices of the tourism development ministry and the national tourism organization presents characteristic posters that display not only the trends in tourism but also the aesthetic changes in socio-political affairs during each period.

Amongst the posters displayed are the works of many established artists such as Pericles Vizantios, Dimitris Mytaras, Louisa Montesantou, Takis, Alekos Fasianos, Kostas Tsoklis and Panagiotis Gravalos, all of whom received commemorative plaques.

The trend in tourism to Greece began in the 1920’s and the Greek state responded through the creation of the national tourism organization. They commissioned Greek artists of the 1930’s to create posters with their own aesthetic signature to represent images of contemporary Greece.

During this campaign and until today, the aim of the Greek tourism posters is to portray images that have made Greece recognizable worldwide. The range of posters can be seen in the variety of styles as well as images depicted, those of characteristic Aegean landscapes, ancient ruins, whitewashed churches or images of natural beauty.

Always dependent on the era and the creator, the exhibition displays work that transcends time and distinguishes Greece as a preferred travel destination.