The Tourism Satellite Account, now in the sixth month of a two-year plan, is soon to become a reality. According to Michael Sfakianakis who is a professor of the University of Piraeus (Department of Business Administration) and a member of the committee in charge of the project, anticipated that the account will be fully operational by late 2008, earlier than originally programmed.

The Tourism Satellite Account is a nationwide project that aims to provide statistics on tourism and enhance their credibility through harmonization of the data with the international method.

According to Mr. Sfakianakis, the project is already one month ahead of schedule as they are currently in the process of completing the study for the application of the account and the realization of the methodology that will be used. 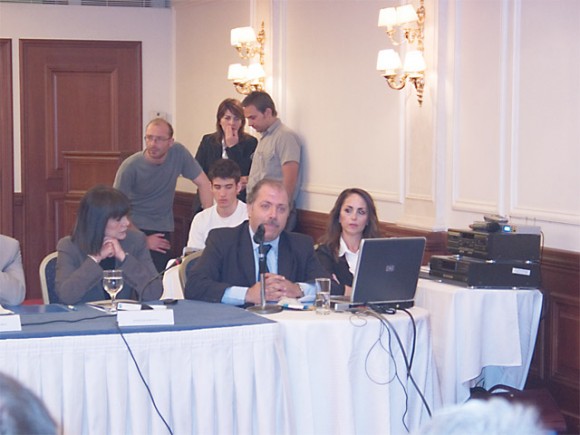 Professor Michael Sfakianakis at the presentation of the Satellite Account and Portal at the recent assembly of the national tourism council.

The professor stressed that “the creation of the satellite account will go hand in hand with the creation of the tourism observatory. This will be the body that will ultimately be responsible for the management of the account and the final collection of data which will help the tourism development ministry execute a successful tourism strategy.”

The professor explained that upon completion of the project, additional funds will be requested to maintain and operate the account. These funds will vary in so far as participation in the collection of data is concerned, as this is the most costly aspect of the project.

Fortunately, according to the professor, there has already been tremendous support from various bodies to enable the project to materialize.

He explained that the primary concern for the account was the synchronization of the data collected by several bodies within Greece such as the Bank of Greece and the National Statistical Service of Greece. Mr. Sfakianakis stressed, “The essence of the account is to produce uniform results throughout Greece.”

Several steps have already been taken in this direction, and as the professor explained, “we have conducted several meetings with these bodies and have so far seen positive results.”

One example of this is the continued cooperation of the Bank of Greece. In their annual border research, the bank recently decided to launch a pilot survey (with added questions for the benefit of the satellite account) in parallel with their own, so as not to discredit the original study but to compare accordingly and identify discrepancies.

The pilot survey was recently launched at Athens International Airport and it is anticipated that it will be done in other regions of Greece on a larger scale in due course.

The aim, according to the professor, is to “use a survey with a range of over 30,000 respondents so as to extract valuable information for the satellite account.”

The much anticipated tourism satellite account will provide reliable and uniform information for the creation of a new tourism identity for Greece.

The professor explained that they are making good progress and that the first phase, the technological aspect of the portal is not only complete “but also boasts the most advanced tools for the navigation of the portal that makes it competitive worldwide.”

Mr. Sfakianakis explained that Hewlett Packard and Greek Geeks, who are responsible for the creation of the portal platform, would provide the technical support, management and upgrade of all technical applications of the portal for the next three years.

The budget for this project so far amounts to some one million euros. According to the professor, funding has been requested from the Community of Information for the acquisition and development of the site content.

The tourism development ministry anticipates the creation of a specialized team with outstanding knowledge of Greece that will be responsible for the management and development of the content of the portal.

According to Mr. Sfakianakis, the aim of the portal runs directly parallel with the aims of the tourism development ministry, that is, “to create a gateway for travelers to Greece and provide, in an accessible, interesting and interactive form, information on the ‘Greek experience’.”