At its annual press call to discuss tourism developments the Association of Greek Tourism Enterprises said tourism arrivals to Greece have increased more than 19.5 percent in the period 2005-2006 when compared with 2004. It also forecast another major increase this year since the first four months of this year have shown an 11.7 percent increase in arrivals. The president of the association Stavros Andreadis stressed the fact that quality in service and products is a major factor in enticing visitors to Greece.

With reference to the nationality of arrivals Mr. Andreadis said: “There is a slow but steady increase in arrivals from Russia however there is a marked decline in arrivals from Switzerland, Sweden, Norway and Denmark and there needs to be a study done in order to find the reason and create new ways to target these markets.” 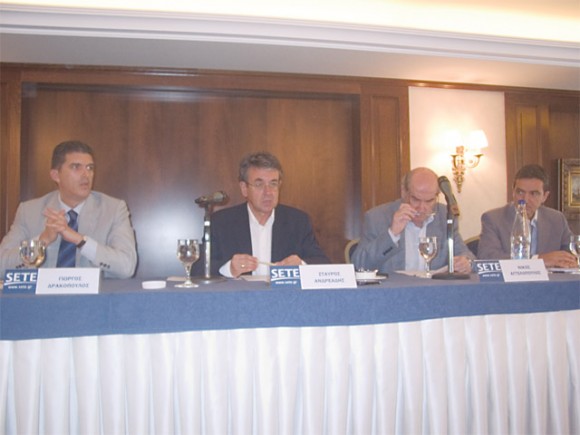 President of the association (center) Stavros Andreadis at the press call.

Recent statistics have shown that Greece will see a positive increase in tourist arrivals in 2007. Although the record was broken in 2006 at 15,7 million arrivals, the National Statistics Service estimates that the figure will reach over 16 million arrivals this year.

According to the National Statistics Service, 2006 saw a 8.44 percent increase in tourism arrivals from 2005. The majority of European arrivals came from Britain, Germany and Italy with a year-on-year rise of 8.1 percent. Sweden had the biggest annual rise of 35.5 percent while the United Kingdom had a small decline of 3.8 percent from 2005. A significant contribution was made by the large increase of arrivals from the United States with 17.3 percent more tourist arrivals than in 2005.

According to research conducted by JBR Hellas-Howarth on behalf of the Athens Hoteliers Association, the highest occupancy was recorded in hotels in London with 76,3 percent, Amsterdam with 74,8 percent, Paris with 69 percent and Athens comes in last with 62 percent despite a 5,5 percent increase.

With reference to the above statistics as well as those collected by the Association of Greek Tourism Enterprises Mr.Andreadis said: “It is very difficult to get a clear picture from these results of tourism movement as there are still various sources for statistics that often leave gaps when compared. There was and still exists the need for a method to collect data that is unified in its aim and results and that can provide uniform statistics to be used by all sectors of the tourism trade.”