Boeing Co. recently unveiled the first carbon-composite 787 with already 55 orders for the lightweight fuel-efficient plane. There is much anticipation for the initial flight of the mid-sized, long-range jetliner, which is the company’s first all-new plane in 12 years.

The jet will not look different on the exterior but the new interior is 50 percent carbon composite materials and another 15 percent titanium, which renders the plane much lighter and fuel efficient than existing jetliners of the same size. 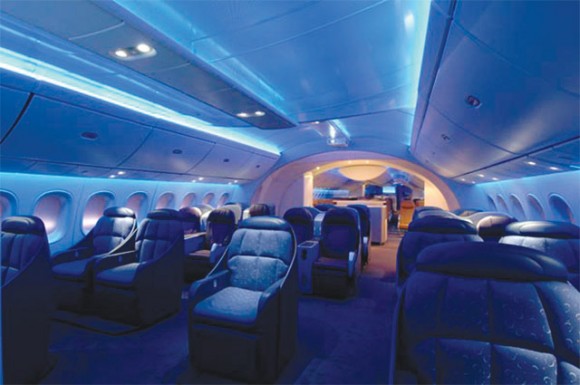 The state-of-the art interior of the new Boeing 787.

The use of fatigue-resistant and rust-free composite materials means air in the cabin can be more humid and the passengers will therefore be less dried out and jetlagged after a long flight. The lighter weight and newly designed engines made by General Electric and Britain’s Rolls-Royce mean air carriers will save about 20 percent on fuel costs. Airlines have jumped at the plane after years of depreciating profit. The great demand already generated for the new jet means Boeing is rapidly closing in on 700 orders worth more than $100 billion at list prices. The first test flight will be in late August or September. First deliveries are expected by Japan All Nippon Airways next May in order to carry passengers to the Beijing Olympics that summer.

Fifty-six more airlines are in line to receive the new 787s, which will be wider, quicker and more fuel-efficient than the 767s they are designed to replace. The new Boeing will offer thousands of miles in extra range, which will make direct routes such as Tokyo to New York easier and cheaper to operate.

The new plane will challenge rival Airbus whose competing A350 XWB wide body plane has been hindered by design changes.