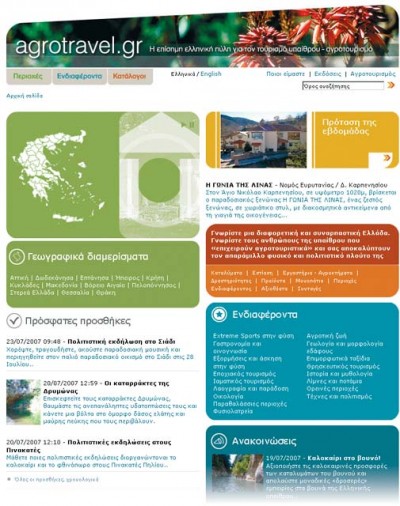 The Internet portal for agritourism, www.agrotravel.gr has received much commendation recently as it earns its place amongst the most visited Greek portals with a plethora of daily hits worldwide to the Greek and English version of the site.

The portal, which has been fully operational for a year, owes much of its success to a united and continued effort of all bodies related to agritourism. According to Agrotouristiki which controls the portal, every month 200 members of the rural tourism community contribute to update the site with the necessary information in an attempt to increase the tourism season in Greece to the much-desired all-year-round status.

Within the portal also exists a site (www.ruralinvest.gr) that provides relevant and useful information to potential investors in rural tourism.

This is a positive step as the European Commission recently launched a competition for the best agritourism destinations. The tourism development ministry has actively participated and invited interest from destinations that wish to be part of the pilot program “European destinations of excellence.”

Proposals were submitted last month and for a destination to be selected candidates must have developed initiatives to promote their tourism product in the last three years, along with a program that highlights the natural beauty and heritage of the region. They should also have adopted a philosophy in favor of balanced social, cultural and sustained environmental development.