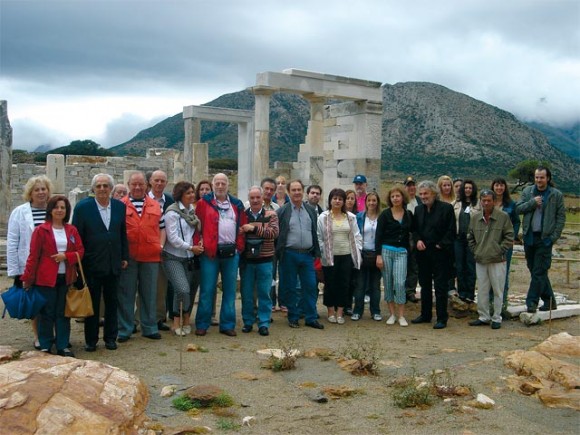 Some of HATTA guests welcomed to Naxos.

A recent meeting of the Hellenic Association of Tourism and Travel Agencies raised awareness over issues that concern illegal activity in the tourism sector and the problems that arise from the monopoly with tour guides.

The meeting took place as members of the association and its National Regional Committee sailed to Naxos. This coincided with a familiarization tour by HATTA that followed the invitation by the municipality of Naxos and Drymalia and the Hotel Association of Naxos.

Also present at the meeting and accompanying the members of the association were journalists from the tourism sector. In total there were 120 participants of which 20 were journalists.

The annual meeting of the regional committee was held en route to Naxos, in the A class section of Blue Star Paros that Blue Star Ferries was kind enough to provide to the association.

During the discussions that took place, there were two predominant issues. The first issue was that of illegal activities in the tourism sector. Anna Anifandi, manager of the association said that the main problems are those of the “illegal organization of tourist activities undertaken without the necessary precaution of using a tour operator.”

The tragic result of these actions by certain groups and individuals are evident in such tragedies as the recent hiking incident at the Lousio River with unfortunate fatalities. With reference to this issue, Ms Anifandi was adamant that “illegal activities will be more specifically targeted, and tour operators will be more strictly regulated.”

The second topic of discussion, one of great controversy and dispute, was the issue of the tour guides. According to Ms Anifandi, “the tour guide regulations as they currently stand hinder the advancement of the tourism sector in Greece and create an unfavourable image.”

The situation according to her “is particularly serious when we consider the amount of tourists on cruise ships that refuse to leave the vessel in Piraeus because of a lack of tour guides to escort them on their visit.”

In addition she said that they are “in the process of collecting all the necessary information to take this case to the European Court since we have come across a brick wall in our efforts to instigate change. With so much unemployment, and young people with so much potential and energy to become tour guides, it is unfortunate that the system does not allow access to individuals who have studied archaeology, per se, to penetrate this field.”

Ms Anifandi discussed not only the option for the tour guide system to be more accessible to Greeks, but also for the regulations to be altered so that foreign tour guides can legally conduct tours in Greece.

The conclusion of the conference was that change is necessary because “established tour guides are few and far between and therefore not adequate in number to suit a sector that is currently thriving. There is a need for change and in our efforts to achieve this, the European court system now seems like the only viable option.”

Regarding the familiarization trip to Naxos island, Ms Anifandi was very impressed. She believes that the island has retained a steady tourism industry without being spoil by mass type tourism. She also believes that Naxos has tremendous potential for rural tourism with a variety of local produce to boast.

The only criticism she made was the inadequate and outdated facilities of the port and the airport that need to be addressed if Naxos is to reach its full potential as a tourism destination.