As the name infers -Aquila is the golden eagle of mythology that carried the thunderbolts of Zeus- Aquila’s owner feels the group’s development plans will make it a symbol of power and endurance. Thus far, the hotel chain is made up of four resorts, The Aquila Rithymna Beach, Aquila Porto Rethymno, Aquila Elounda Village and Aquila Atlantis.

Professionalism plays a major role in achieving the aim. For example, both Dimitris Tsounis, the general manager of the hotel group, and Dimitris Tyrokomos, the sales manager, have a long-term relationship with the tourism industry and are second-generation tourism professionals. Marianna Belalidou, marketing manager, and George Magoutas, the operation manager, play an integral role in the development of the group. 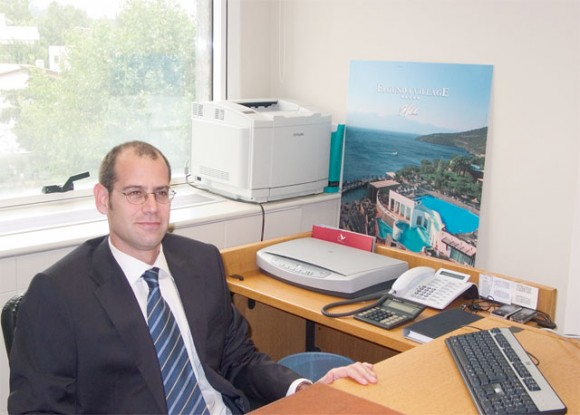 In a recent interview with Dimitris Tyrokomos he discussed the plans and prospects for the hotel group. For 2008, the group has designs for all four hotels. Aquila Elounda will see the extension of over 70 sea-view bungalows.

At Aquila Atlantis and Aquila Porto Rethymno there will be renovation of the interior, with refurbishment of existing rooms and extension through the creation of new types of rooms such superior, deluxe and executive suites.

At Aquila Atlantis there will be particular emphasis on the refurbishment of the conference rooms.

At Aquila Rithymna Beach, which primarily attracts families, emphasis will be placed on establishing the Kid’s Village where all-inclusive packages will provide a Kids Tasty Corner and free of charge babysitting at specific hours. They aspire to create a distinction between children animation and children attendance with two different programs to cater for all. There are also plans for the creation of a spa.

The group is investigating both the acquisition as well as the construction of more resorts of this type throughout Greece. The locations rely on tourism as well as environmental factors on which the group places great emphasis.

Currently, the group employs a workforce of more than 500 staff in all four hotels.

At the moment the resorts cater primarily to foreign tourists through large tour operators. However, Mr. Tyrokomos explained, our aim “is to entice the domestic tourism market through the creation of a stronger person-to-person sales initiative, more lucrative prices for Greeks and through local media advertising, such as magazines.”

The group also wants to strengthen and focus on online booking as well as the development of their website to make it more user friendly so it entices and lures customers worldwide.

Mr. Tyrokomos added that the group’s aim is to “secure the luxury brand name and provide it with its own identity and clientele.” He added that we aim to do this “by ensuring the service will change only for the better through high quality staff that are continuously trained and educated for this purpose.”