Tourism Off To a Good Start 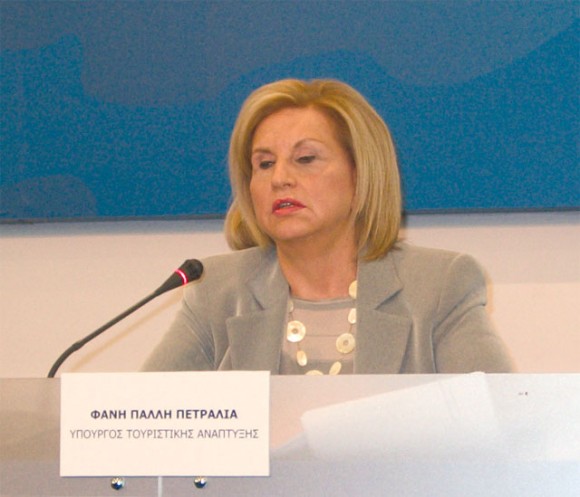 Tourism Development Minister Fanni Palli-Petralia expressed her optimism for the summer at a recent press conference where she explained how this May has been the most successful one in recent years. This substantiates her claims that Greece has now become a “preferred destination” for international travelers.

She also emphasized that the main aim of the ministry is to “ensure a friendly, clean and above all safe climate for visitors to Greece because this is what visitors expect from us.” Ms Petralia added that a friendly disposition, Greek hospitality, a clean environment and upgraded services define what she refers to as “human vacations.”

She then spoke of the recent launch of the ministry’s “Tourism for All” initiative which began strongly with the random inspection of accommodation and tourism units throughout the country. Thus far well over 5,500 were inspected and 800 units were found unfit for stay due to a lack of necessary fire precautionary measures and Ms Petralia intimated that she would not rest until these measure were adhered to or these units are closed. She was adamant that “we will not play with the security of our visitors or the hard earned reputation of our country.” In addition, she reemphasized her aim to give a humanistic dimension to traveling in Greece.

The tourism development ministry has also opened a new phone line, 1571, for foreign and domestic travelers to register complaints so they can be “addressed effectively and promptly.”

And, following the success of the “explore your senses” campaign, the tourism development ministry presented its worldwide Yahoo Internet campaign with a budget of over 2 million euros that targets a wide range of visitors through several different specific tourism domains. Ms Petralia expressed her satisfaction to see Greece advertised through modern mediums such as the Internet.

Through this medium the ministry has initiated an approach to distant markets such as China and Australia as well as Europe. The websites target specific travel sectors and allow full interaction to provide the traveler with the necessary information to prepare the trip of their choice, with emphasis also on city breaks, rural tourism, and business tourism. It is within this scope that they aim to create “an online community around Greece,” so that “every Yahoo visitor can be a potential visitor to Greece.” The websites will also include competitions with the theme “explore your senses” in which participants can win five-star accommodation.

According to Ms Petralia, the future of tourism should comply with “the utmost respect for our environment.” The changes in the world’s climate and key environmental issues are a concern for the development of tourism in Greece, as Ms Petralia explained, “without respect for the environment, natural and man made, we have no tourism.”

Ms Petralia also discussed the program for the training of taxi drivers. Seminars have begun in Athens and Thessaloniki. The program will extend its training to taxi drivers in Crete and the ministry foresees more locations throughout Greece as, so far, the seminars have “proven successful,” according to Ms Petralia.

As well, Ms Petralia said the successful opening of the Greek National Tourism Organization office in Cyprus last month will now lead the way for new offices as five new locations are slated to open. These offices are in Warsaw, New Delhi, Belgrade, Sofia and Dubai. After her recent visit to Dubai, Ms Petralia emphasized the need for an office there as for the Arab world “Greece is the door to Europe.”