A general consensus for the prime minister’s continued support in overcoming hurdles that continue to harm business potential in the tourism sector was the essence of the speech given by Stavros Andreadis, president of the association of Greek tourism enterprises, during the associations’ recent 15th annual general assembly.

Mr. Andreadis explained that Greek tourism would see considerable improvement if competition within the sector was encouraged and if a series of measures were initiated to assist the procedure.

It is within this framework that Mr. Andreadis expressed the association’s positive outlook on the creation of a body that would represent the entire Greek business community and undertake the responsibilities required by this sector. “The union of the business sector that we desire carries the necessary prerequisites of equality, mutual respect and understanding.”

He then commented on the significance of the creation of the tourism development ministry, now in its third year, but also on the limitation of the actions it can undertake when considering the vast needs of the tourism industry and economy.

It is within this point that the association’s president stressed the need for the allocation of some of these responsibilities to the private sector. These responsibilities include license issuing and category classification that should be performed more effectively by the Hellenic Chamber of Hotels. He added that the Hellenic Chamber of Hotels is now “in a mature enough phase to be able to evolve in to a tourism chamber that would house every tourism enterprise in Greece.” 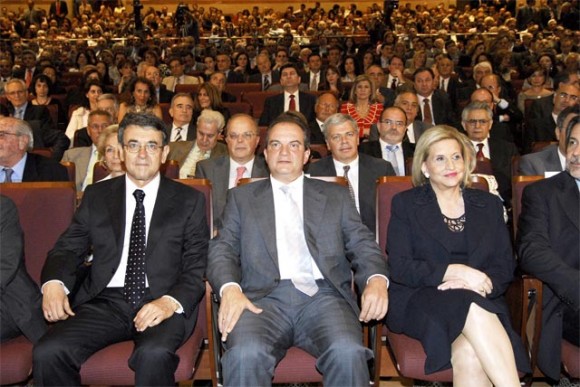 Mr. Andreadis pointed out the need to hasten the development and improvement of our regional airports and ports so “we should not forget that comparison is harsh and with reference not to what we used to have, but to what the competition offers today.” He believes that free competition in the tourism trade is hindered in land, air and sea as the monopoly of regional bus transport services that exists today illustrates.

He also said the focal point of the new national strategic development policy of Greece centers on Greece’s’ regions, since they absorb 80% of the funds from the fourth European support framework program. According to statistics collected by the World Economic Forum, he said Greece came in 10th worldwide in 2005 for spending by tourists per capita amounting to $1,073 per tourist. This, according to Mr. Andreadis defies the myth of Greece providing “a cheap tourist product.”

Most important is the fact that the same source shows us, according to Mr. Andreadis, that Greece holds the 5th place amongst pioneers in worldwide tourism as the total number of funds received annually is equal to at least $1,200 per citizen.

Last year was the second consecutive year that showed an increase in the tourism economy. It is important to keep these statistics in mind as Greece in 2007, said Mr. Andreadis, is in its final year of “reaping the benefits of the successful organization of the Olympic Games.”

This is how he painted a picture of Greek tourism today that continues to progress in a “worldwide climate where there are no safety nets, no protection or illusions, and where everything change without notice.”