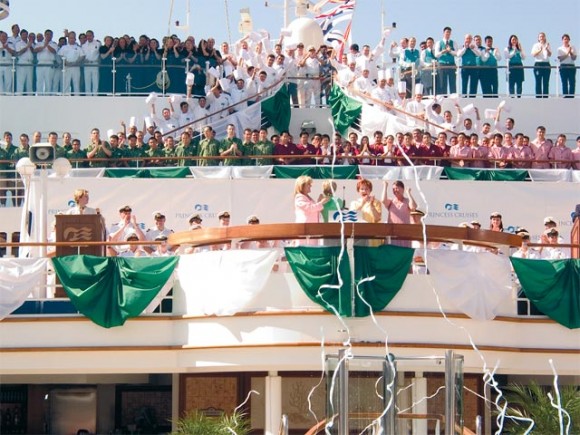 Princess Cruises selected port of Piraeus in order to christen its new vessel and promote, at the same time, its Mediterranean cruise program.

In order to promote its Mediterranean cruise program with its the new cruise vessel, Emerald Princess, the company’s owner, California-based Princess Cruises, selected the port of Piraeus for the ship’s christening.

The company initially had planned to simultaneously name both its new ships in a historic dual ceremony at Santorini on May 12. Instead, the 3,070-passenger Emerald Princess was christened on Mother’s Day in Athens on May 13. The new date and location for the second new vessel, Royal Princess, will be announced.

The company said that out of respect for the tragic sinking of the Greek cruise ship off the Santorini coast, the naming ceremonies of the new five-star cruise vessels Emerald Princess and Royal Princess – previously scheduled to take place in the same location – were changed to different dates and ports.

At Piraeus, the naming of the vessel turned out to be a superb event. Besides Greek personalities, such as the port city’s mayor, Panagiotis Fasoulas, on hand for the celebration were a Greek dance team, kinitiras dance spectacle, and the city’s brass band. The blessing was conducted by Father Chrysostomos, of the Holy Diocese of Piraeus.

Foreign personalities included television mothers and daughters who christened the ship. Florence Henderson and Susan Olsen of The Brady Bunch, and Marion Ross and Erin Moran of Happy Days were the Emerald Princess godmothers. Hosting the event was the Love Boat’s “Captain Stubing” himself, Gavin MacLeod.

The Emerald Princess itinerary features a 12-day cruise with 10 ports of call, including visits to Athens and Rome. The cruise company is represented in Greece by Cruiseplan.