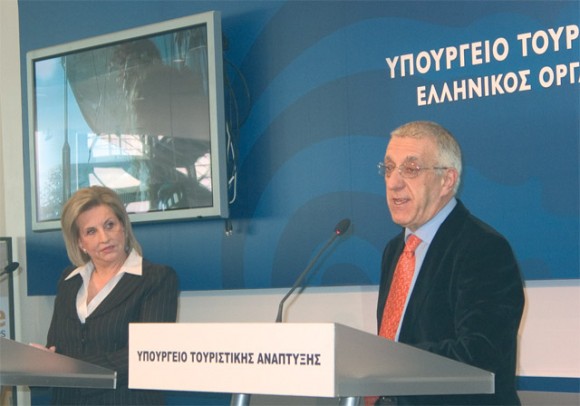 Athens must be highlighted as a tourism destination in itself and not just a transit center for visitors to other parts of the country, Tourism Development Minister Fanni Palli-Petralia and Athens Mayor Nikitas Kaklamanis agreed last month during a meeting held at the minister’s offices.

At a press call after the meeting, Ms Palli-Petralia announced the two sides’ agreement on a program aimed at promoting city tourism by advertising Athens as an international tourism destination. In this context, on June 11-13, the Faliron Sports Hall will host a conference on city breaks.

The minister also referred to a program to revamp the coastal zone by creating a bicycle road and pedestrian route of 35 kilometers, stressing that the project is advancing well.

On his part, Mayor Kaklamanis announced that the City of Athens is about to convert the municipal Athens Tourism and Economic Development Agency into an incorporated company, merging the organization with the existing Athens Employment and Entrepreneurship Center.

“I expect therefore that toward the end of the month, once the Athens City Council has passed the relevant decision, we will be able to present the first proposals concerning the city’s tourism and economic development,” Mr. Kaklamanis said.

He added that preparations for the “City Breaks 2007” conference have already started and expressed his interest in strengthening domestic tourism focused on Athens.

Asked about the proposal by the Athens Hoteliers’ Association to create an agency for promotion and organization in Attica, Ms Palli-Petralia said the ministry is coordinating all activities across Greece, while Kaklamanis noted that only when Athens obtains a metropolitan authority would real coordination become possible.