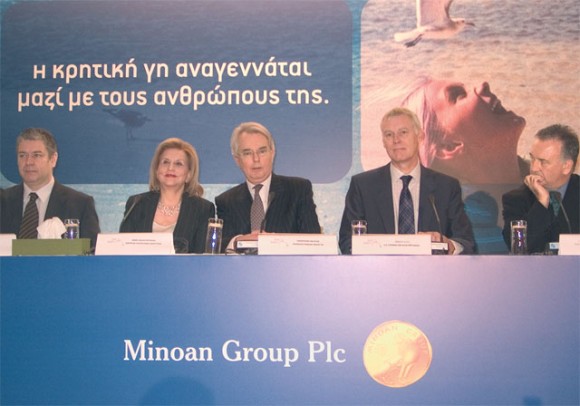 British investors presented plans last month for a vast, all-season resort on the island of Crete that is expected to cost 1.2 billion euros. Developers of the project described it as a world model of environmentally friendly development, and one of the biggest tourism investments ever carried out in Greece.

The project has been on the books since 1995 when Minoan won the tender, but was held back due difficulties in obtaining environmental permits. Only recently did the company get a green light to carry out the project after extensive environmental studies approved by six Greek government ministers.

It is to be built on an area that covers 2,500 hectares in Cavo Sidero, a rural coastal area of eastern Crete. It will include golf courses and six stone villages in the traditional Greek style, which will offer five-star accommodation with 7,000 beds within a 1% building density.

Land for the project is leased for 80 years from the Moni Toplou monastery, which also gets a percentage of revenue and profits. And according to the Minoan representatives, profits posted by the monastery will be distributed to the local community through local projects.

“This is a resort with a difference,” said Christopher Egleton, chairman of developers Minoan Group Plc. “There’s nothing like it anywhere in Europe or even, I believe, in the United States,” he said during last month’s press call.

He said the European market demands sustainable and environmentally friendly projects and we use sustainability in every avenue of the project. “This unit will respect the environment in this unique country and will be a model for other projects around the world,” said Mr. Egleton.

The first phase of the project is expected to be operational from 2009 and will feature a resort complete with a conference center, sports facilities and a golf course whose irrigation will be supplied by desalinated seawater.

On hand for the announcement was Tourism Development Minister Fanni Palli-Petralia. She said that this “is one of the greatest projects ever carried out in Greece…. There will be complete respect to the environment and careful management of the local ecosystem.”

Because the land area is protected under the Natura 2000 European network of key natural habitats, Greek environmental groups opposed the creation of golf courses, which they say require huge amounts of water for maintenance.

The project manager countered the opposition by saying water supply will be ensured by an on-site desalination facility. On the other hand, United Nations environmental experts have expressed doubts about desalination, as the disposal of the salt can cause further damage to the marine environment.

Meanwhile, to ensure there are no environmental problems, the Minoan Group representatives said that it would work closely with Forum for the Future, a British charity created by Friends of the Earth that specializes in sustainable development that protects the land and local fauna.

“We have signed a partnership agreement with Minoan and we will oversee every stage of the construction project,” Peter Madden, Forum for the Future’s chief executive, told GTP.

“This project will consist of a world-class project for sustainable development,” said Mr. Madden.

Construction is scheduled to begin in May and the resort is expected to be fully operational by 2017, according to the planners. It’s expected to create 2,300 direct jobs and another 1,000 indirectly.