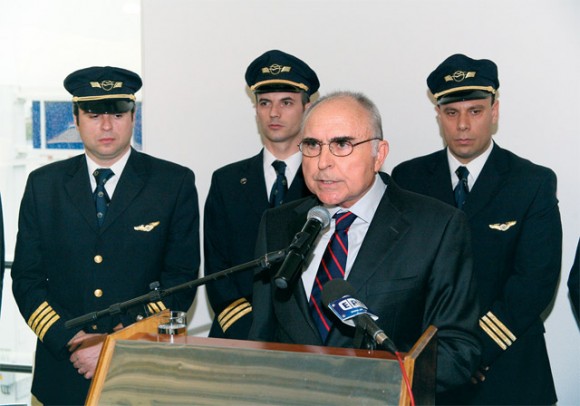 Theodoros Vassilakis, chairman of Aegean Airlines during the inauguration of his company’s new Airbus A320s at Athens International Airport.

Theodoros Vassilakis, chairman of Aegean Airlines, was on hand late last month at the Athens International Airport for the inauguration ceremony of his company’s new Airbus A320s.

Aegean had just accepted delivery of the first three of 19 new Airbus passenger jets ordered by the 8-year-old Greek airline. All will be delivered by 2010 at a total cost of $800 million, according to an Aegean announcement.
To christen the new aircraft, Aegean flew in 20 top students from the islands of Lesvos, Samos and Chios. The students from Lesvos christened the “Ethnos,” students from Samos the “Kinesis,” and students from Chios the “Nostos.”

Aegean also has signed an option with Airbus for an additional eight similar passenger jets.

Last year, Aegean carried 4.447.481 passengers using its 21 jet aircraft, thus achieving an increase of 11% compared with 2005. The number of passengers carried is important on a European scale also, as it classifies Aegean as a medium size air carrier in Europe.